Learn more
Size750mL Proof90 (45% ABV) *Please note that the ABV of this bottle may vary
Aged in forty hand selected Suduiraut barrels, in a proprietary “hot box” environment, this expression combines the sweetness of Sauternes, the wood notes of both American and French oak, and the grain of a premium bourbon in a delicious, complex and balanced final product.
Notify me when this product is back in stock. 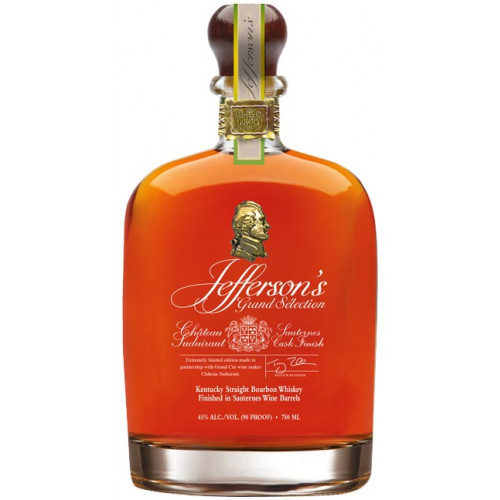 In the innovative spirit of aging Jefferson’s whiskeys in truly innovative ways and in various cask types, they have merged the sweetness of the Chateau Suduiraut wine and the toasted staves of those French oak wine casks with their well seasoned, complex Kentucky Straight Bourbon. This yielded the Jefferson’s Grand Selection Chateau Suduiraut Sauternes Cask.

After hand selecting forty Suduiraut barrels, refilling them with Jefferson’s Reserve bourbon, and extra aging them in a proprietary “hot box” environment, they have created a one of a kind bourbon full of character and flavor. This expression combines the sweetness of Sauternes, the wood notes of both American and French oak, and the grain of premium bourbon in a delicious, complex and balanced final product.

Pick up a bottle of this Chateau Suduirat finished selection today!

Citrus, floral and honey notes on the nose. Citrus, burnt sugar, cinnamon, caramel, and flavors of lemon zest on the palate. The finish balances exceptionally with the spices of the bourbon.