Size750mL Proof94 (47% ABV)
A marriage between the spiciness of American Rye and the refinement of cognac. Jefferson's Straight Rye is finished in cognac barrels between 9 and 19 months.
Notify me when this product is back in stock. 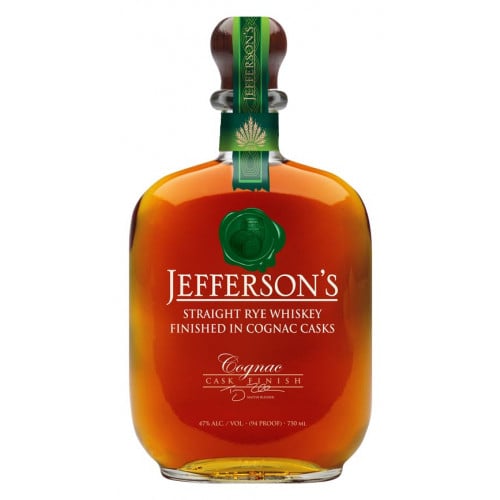 Founded in 1997 by Trey Zoeller and his father Chet, a famous bourbon historian, Jefferson's Bourbon began as a family affair. Producing spirits was in their blood, since as early as in 1799, Trey's 8th generation grandmother was actually arrested for the production and sales of spirits at a time when it was prohibited by law. Today, more than two centuries later, Trey Zoeller continues to push the boundaries of bourbon with his curious mindset, while upholding this rich tradition.

Perhaps most famous for their Voyages collection – a collection of dark savory bourbons, aged beyond their years on a boat that circles around the world multiple times – Jefferson's Bourbon offers a wide variety of premium whiskeys.

Jefferson's Rye Cognac Cask Finish offering is their Straight Rye Whiskey, finished in cognac casks. This is a marriage between spicy American Rye and refined cognac. While rye whiskey is typically more one-dimensional, the cognac finish adds the more than welcome complexity and depth of character. In Trey Zoeller's words: "I wanted to look at rye through a new lens and elevate it past the supporting role it’s commonly associated with." It’s double-barreled first in new charred oak and then in cognac casks for at least 9 months before it’s bottled at a pleasant 94 proof. An exquisite showcase of Jefferson’s famous innovative maturation methods that result in the typical dryness being replaced by a thick mouthfeel of honey and orange notes.

At first, you’ll be greeted by cinnamon and honey. The palate then develops further with spice, nutmeg and citrus notes for a more complex profile. The finish is satisfyingly long with peeking notes of oranges and honey.