Size1750mL Proof60 (30% ABV)
Crafted with Jameson's signature triple-distilled flagship Irish whiskey, this flavored expression adds a zestiness to the profile with natural orange flavor. Bottled at 60 proof, it's a balanced and fruity expression with a solid whiskey backbone. 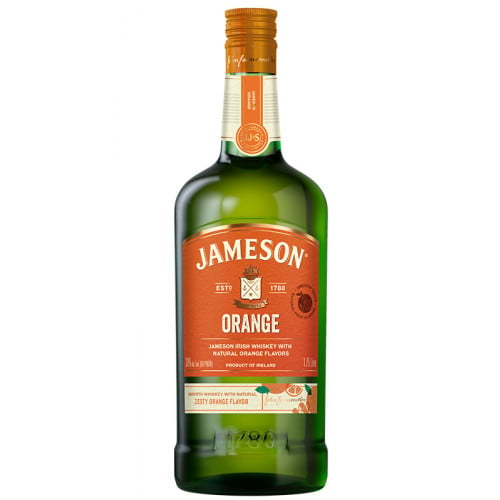 You'd be hard-pressed to find a more iconic name in the Irish whiskey world than "Jameson." The Jameson tradition dates all the way back to 1740, when John Jameson was born into a family whose motto, "Sine Metu" ("Without Fear"), was earned through the family's courage in fighting pirates on the high seas during the 1500s.

John Jameson himself was a living embodiment of Sine Metu, and his ancestors' bravery inspired in John a boldness that led him not only to open his own distillery in the latter part of the 18th century, but also to pioneer the technique of triple-distilling whiskey — now the gold standard in the Irish whiskey industry. John Jameson lived to be 83 — an impressive feat for someone born in the 18th century — and his descendants John II, John III, and John IV all honored his legacy by leading the distillery well into the 20th century.

Released in 2022, Jameson Orange is a new addition to their core lineup. It combines their triple-distilled flagship whiskey with natural orange flavor. Paired with the whiskey's signature smoothness, the orange brings a citrusy and zesty fruitiness to the profile, resulting in a balanced and versatile expression that can be sipped neat, on the rocks, or used to craft delicious cocktails. Jameson Orange is bottled at 60 proof.

Get your bottle of this orange-flavored whiskey today!

Orange zest and fresh orange aromas greet the nose with a solid sweet whiskey backbone. The palate is delicate and full with orange, spice, nuttiness, and sweet vanilla. The finish is clean and sweet with lingering orange.