Learn more
Size750mL Proof92 (46% ABV) *Please note that the ABV of this bottle may vary
The newest addition to their permanent collection, Redbreast Lustau Edition pays homage to its Irish origins while highlighting the brand’s ties to Spain’s legendary sherry producer, Bodegas Lustau in Jerez. 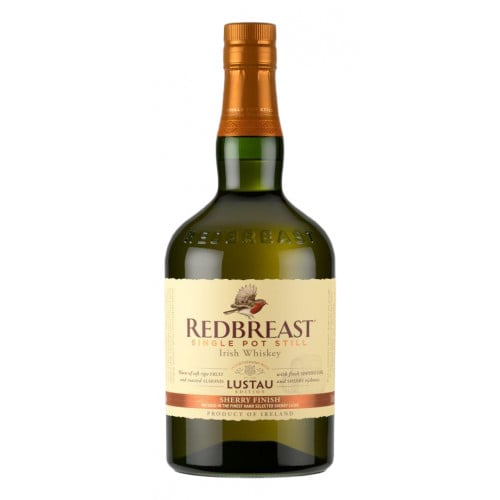 In 1857, W&A Gilbey Co. was founded in a basement cellar at the corner of Oxford Street and Berwick in London. By the turn of the century, the company — a wine and spirits merchant — held one of the largest stocks of maturing whiskey in its inventory, and had expanded to Dublin, Belfast, and Edinburgh. At the suggestion of the company’s chairman, an avid ornithologist, in 1912 Gilbeys began selling whiskey named after the European robin redbreast.

The latest release in the Redbreast line, Lustau Edition continues to pay homage to the legacy of Gilbey and its Irish origins while highlighting the brand’s ties to Spain’s legendary sherry producer, Bodegas Lustau in Jerez. Though prior editions of Redbreast have also been aged in former sherry casks, this blend was crafted with the goal of putting flavors imparted from Oloroso sherry at the forefront of the palate.

As are all Redbreast whiskeys, Lustau Edition is crafted from a marriage of malted and unmalted barley, which are milled and mashed before being triple-distilled through traditional copper-pot stills. The inclusions of unmalted barley in the whiskey's mashbill, along with the tradition of triple distillation, are uniquely Irish approaches to producing whiskey.

Following distillation, the Irish whiskey is matured for nine to twelve years in a combination of ex-bourbon and sherry casks. What makes this blend particularly special is the final year it spends finishing in Spanish oak Oloroso casks, hand-selected from Bodegas Lustau for the purpose of accenting sherry flavors that underlie previous releases from Redbreast.

As a result, Redbreast Lustau Edition has an aroma of stone fruit, prunes and dates accented with anise and toasted oak. The creamy palate combines spices typical to the Redbreast line with a rich sherry finish thanks to the Spanish oak.

This is a historic release from Redbreast, the first permanent addition to the collection since Redbreast 21 premiered in 2013.

Aroma of stone fruit, prunes and dates accented with anise and toasted oak. The creamy palate combines spices typical to the Redbreast line with a rich sherry finish thanks to the Spanish oak.