Learn more
Size750mL Proof110.2 (55.1% ABV) *Please note that the ABV of this bottle may vary
Jameson Bow Street 18 Years is a special blend of rare pot still and grain whiskeys from the iconic Irish whiskey brand. After ageing in American bourbon barrels and Spanish sherry butts for 18 years, these whiskeys are married and finished at the original Jameson Distillery Bow Street.
Notify me when this product is back in stock. 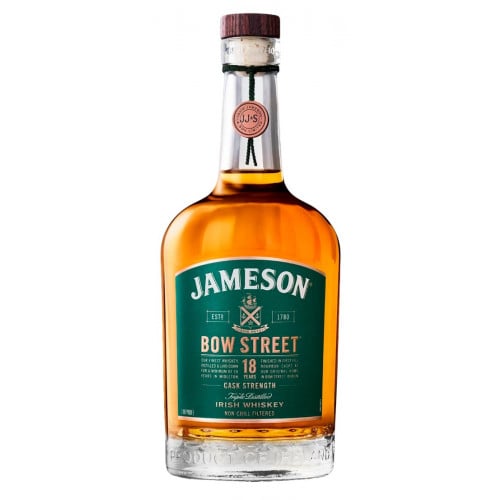 Jameson Bow Street 18 Years is a special blend of rare pot still and grain Irish whiskeys produced at the Midleton distillery, launched in 2018. After ageing in American bourbon barrels and Spanish sherry butts for 18 years, these whiskeys are married together and spend their final finishing period at the original Jameson Distillery Bow Street, in the warehouse that can only hold 84 casks. This is the brand’s rarest release, bottled once per year at cask strength.

The nose has rich wood-driven influence with deep toffee notes and spice. Toffee and oak remain consistent on the palate, with hints of leather and vanilla and a subtle sherry nuttiness adding depth and complexity. The finish is long and full, with sweet toffee notes slowly fading, while the toasted oak and spice linger on until the very end.