Nikka From The Barrel Japanese Whisky

Be the first to review this product
Released in 1985 by the Japanese brand Nikka Whisky, this complex blend features more than 100 different batches of their malt and grain whiskies. A timeless classic.
$114.99
Add to Wish List

Masataka Taketsuru, the father of Japanese whisky, studied the art of whisky at major distilleries in Scotland while attending chemistry courses at Glasgow University after World War I. Coming from a family of sake brewers, he became the first Japanese to master the art of whisky. Upon returning to Japan with his wife Rita, Masataka spent 10 years producing Japan’s first genuine whisky at Kotobukiya Limited.

In 1934, Taketsuru decided to venture on his own and build his first independent distillery in the north of Japan in Yoichi, Hokkaido, where the climate was reminiscent of Scotland with its cool temperatures and humidity – this is how Nikka Whisky was born. Two years later, Masataka designed his first pot still, produced in Japan, and the production of Nikka Whisky began. The first whisky bottle came into existence in 1940.

In 1960, the demand for Nikka Whisky was surging and another location in Japan was needed to open a second distillery. Finally, Masataka settled on a wide forest valley at the junction of the Hirosegawa and Nikkawagawa rivers. Like in Yoichi, the localized humidity from the rivers and surrounding hills, together with the quality of water from Nikkawagawa River, created the perfect location for a second distillery, which he named Miyagikyo.

Released in 1985, Nikka From The Barrel is a complex whisky blend of more than 100 different batches of malt and grain whiskies. Still relevant decades after its release, this is a timeless bottle, boasting a full and rich profile of intense flavors 'from barrels' - which only blenders can taste and smell. After blending, it’s put to rest for an additional couple of months in used barrels to enable all the components to come together in harmony. The result is a mellow tasting whisky, bottled at the ideal 90 proof.

In 2018, Nikka From The Barrel was awarded Whiskey Advocate's Whiskey of the Year.

Get your bottle of this timeless 1985 Nikka release today!

The nose greets you with a complex combination of sherry, fruity and spicy notes. The palate is complex, full of sweet honey, vanilla and caramel notes, mingling with fruity and spicy tones as well as a creeping smokiness. The finish is sweet and dry. 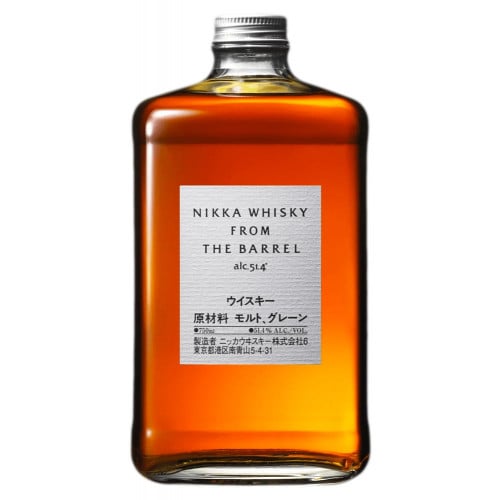