Caskers Rewards members earn up to 6 store points back when buying this bottle.
Size750mL Proof92 (46% ABV)
This stunning release won “Best Single Malt Irish Whiskey” at the 2019 World Spirits Competition.
Notify me when this product is back in stock. 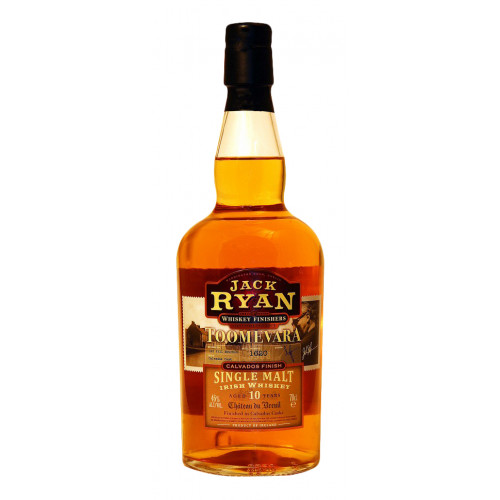 The Ryan family spans an incredible six generations in the whiskey business. The family oversees all aspect of production, from owning their own public houses, to farming the barley and distilling the spirits. Today Eunan Ryan is at the helm of the family's award-winning whiskey business, along with his Jack Ryan Whiskey Company in Dublin.

This Toomevara 10YO Single Malt is aged in ex-bourbon barrels before entering Calvados casks sourced from the Château du Breuil in Normandy France. This whiskey is the first release of the Generation Trilogy, which commemorates six generations of the Ryan family’s whiskey legacy.

Prominent aromas of apples on the nose, followed by sap, cut grass, and orange cream soda, honey, grassy notes, cream, and citrus peel. On the palate are unmistakable notes of apple pie, soft cinnamon and citrus peel, followed by fruits, sandalwood. The finish is dry, with a hint of yeast and green apples.