Size750mL Proof94 (47% ABV)
Only one out of every hundred barrels of Jack Daniel’s Tennessee Whiskey is chosen to become Jack Daniel’s Single Barrel Select. 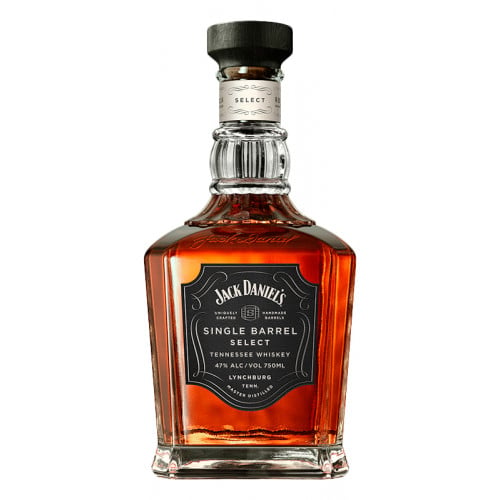 To craft Jack Daniel’s Single Barrel Select Tennessee Whiskey, master distiller Jeff Arnett of Lynchburg, TN first selects one out of every hundred barrels for its unique and expressive qualities. Once these special casks have been identified, they are moved to the very top of the distillery’s rickhouses, where extreme temperature changes facilitate dramatic interactions between the whiskey and the wood (by law, “Tennessee whiskey” must be aged new, charred American oak barrels). Finally, each barrel is bottled individually at 94 proof, resulting in truly “one-of-a-kind” flavors in every bottle.

Jack Daniel’s Single Barrel Select Tennessee Whiskey has a cherrywood color and classic aroma of vanilla, caramel, brown sugar, and even some cinnamon. On the palate, notes of oak and charcoal become evident, along with sweeter touches of orange peel and honey. The finish is sweet and spicy, with flavors of butterscotch and clove lingering on the tongue.

Each bottle of Jack Daniel’s Single Barrel Select Tennessee Whiskey is hand-numbered, including the exact barrel number from which it was drawn.

Pick up a one-of-a-kind bottle of Jack Daniel’s today!

Cherrywood color and classic aroma of vanilla, caramel, brown sugar and even some cinnamon. On the palate, notes of oak and charcoal become evident, along with sweeter touches of orange peel and honey. The finish is sweet and spicy, with flavors of butterscotch and clove lingering on the tongue.