This product is available in: CA, IL, NY, ND Unfortunately, we can't ship to PO Boxes and APO addresses.

Size750mL Proof130.30 (65.15% ABV)
This barrel proof offering of Jack Daniel's single barrel Tennessee whiskey is aged in handmade toasted and charred American oak barrels. A robust and smooth whiskey, expect signature flavors of vanilla and toasted oak.
Notify me when this product is back in stock.

This product is available in: CA, IL, NY, ND Unfortunately, we can't ship to PO Boxes and APO addresses. 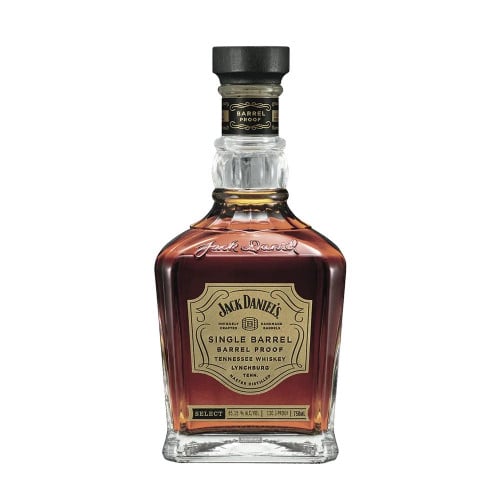 Barrels from the upper levels of the rickhouse are selected by Jack Daniel's master distiller to produce Jack Daniel's Single Barrel Barrel Proof. While their single barrel whiskey is watered down and bottled at 94 proof, their single barrel offering is bottled between 125 to 140 proof. This Tennessee Whiskey is aged in handmade toasted and charred American oak barrels. The maturation process imparts trademark vanilla and toasted oak flavors on this robust and smooth whiskey, reaching new levels of intensity due to the higher proof. The palate is well-balanced by sweet brown sugar and finishes nicely with dark spice.

The nose greets with signature notes of vanilla, caramel and brown sugar. The palate brings more woody notes but still offers sweet and rich flavors of vanilla and toasted oak. The finish is long with a hint of dark spice.