Size1000mL Proof90 (45% ABV)
Matured in unique Sinatra Barrels, this whiskey is made in homage to Frank Sinatra and his relationship with the venerable distillery.
Notify me when this product is back in stock. 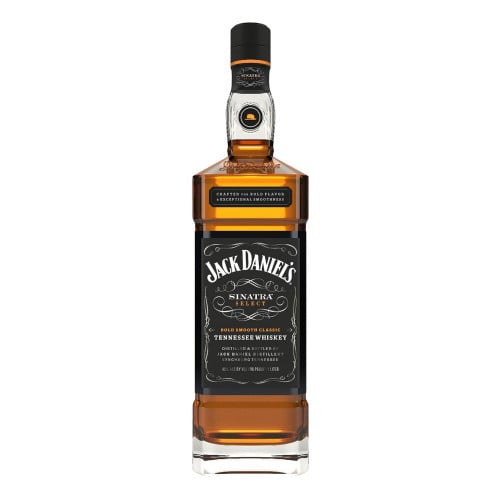 The whiskey is made from a mash of corn, rye, and malted barley. Once the ingredients have been mashed, they are fermented with a proprietary strain of yeast and iron-free cave spring water. Following fermentation, the wash is distilled and the resulting whiskey is then filtered through 10 feet of charcoal. This filtering process, known as the Lincoln County Process, earns the whiskey the title of "Tennessee Whiskey" and imparts a signature, sweet yet smoky flavor profile.

Once the whiskey has been charcoal filtered, it is aged in Sinatra Barrels, which are equipped with unique, deep grooves on the interior of the barrel staves. These grooves increase the surface area of the barrels, and in turn, the exposure of the whiskey to the wood. Following maturation, whiskey maturing in Sinatra Barrels is married with whiskey maturing in traditional Jack Daniel Distillery barrels. As a result of this maturation process, Jack Daniel Distillery Sinatra Select Tennessee Whiskey has a rich amber hue, along with an aroma of sweet caramel, toffee, vanilla and oak. The aroma gives way to notes of leather, candied oranges and woody spices on the palate, and is considerably chewier than the traditional Jack Daniel Distillery Tennessee Whiskey. In addition, the finish is elegant and long, with touches of tobacco and chocolate mingled with notes of cloves and spice.

Jack Daniel Distillery Sinatra Select Limited Edition Tennessee Whiskey comes in a unique, 1-liter bottle that is enclosed in an orange-accented case (orange was Sinatra's favorite color). "This really honors what he meant to the brand," says Arnett.

Aroma of sweet caramel, toffee, vanilla and oak. Notes of leather, candied oranges and woody spices on the palate. Chewy, dense mouthfeel. Finish is long and smooth, with touches of tobacco and chocolate mingled with notes of cloves, vanilla and spice.

4.2 out of 5
(3 reviews)
Write a review
Real email address is required to social networks
Sign in
Login with Google
Login with Facebook
Or
We also recommend