Rating:
73%
3
Size750mL Proof80 (40% ABV)
Aged in Kentucky for a minimum of four years, this bourbon is crafted in homage to J.R. Ewing, one of the most popular characters in the hit television series Dallas.
Notify me when this product is back in stock. 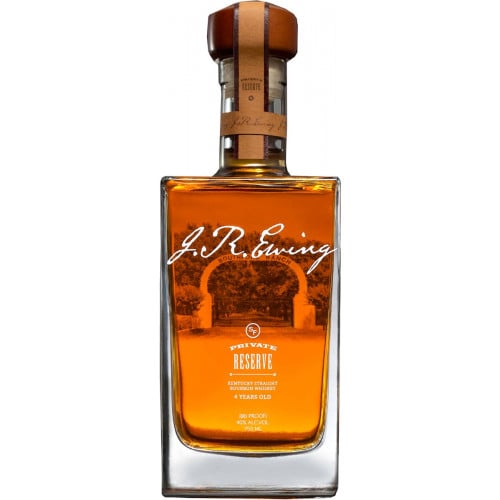 Federal regulations in the United States require that bourbon be made from a mashbill of at least 51% corn before being aged in new oak barrels and bottled at 80 proof or higher. Bourbon that meets these requirements and that has been aged for a minimum of at least two years in Kentucky may be called Kentucky straight bourbon.

J.R. Ewing Private Reserve Kentucky Straight Bourbon Whiskey has a mashbill of 81% corn, 13% rye and 6% malted barley, and is aged for a minimum of four years. The bourbon is crafted in homage to J.R. Ewing, one of the most memorable characters in the hit television series Dallas. A ruthless and cunning Texas oil baron whose drink of choice was bourbon, Ewing was well-known for his discerning taste. “Creating a brand of such high quality is reflective of J.R.’s thirst for the best in life, and the new brand really pays tribute to the character with whom everyone around the world is familiar,” said Andy Harmon, co-founder of Southfork Bottling Company.

The bourbon has a sweet and subtle nose, with notes of vanilla, oak, caramel and sweet tea. The finish is incredibly smooth, with light orange and honey textures that linger.

“My father, Larry Hagman, would have loved the fact that this new bourbon was named after his legendary character, J.R. Ewing — a signature spirit inspired by one of the most beloved, conniving and trailblazing characters in entertainment history,” said Preston Hagman.

Sweet and subtle nose, with notes of vanilla, oak, caramel and sweet tea. Finish is incredibly smooth, with light orange and honey textures that linger.

3.7 out of 5
(3 reviews)
Write a review
Real email address is required to social networks
Sign in
Login with Google
Login with Facebook
Or
We also recommend