Be the first to review this product
Bourbon in 2016, this Isaac Bowman Bourbon is aged in charred white oak barrels, then finished in port barrels.
$49.99
Add to Wish List

Before establishing Virginia’s oldest distillery, A. Smith Bowman purchased the 7,200-acre Sunset Hills farm in Fairfax County in 1927. Shortly after establishing his farm, his fields became so abundant that he decided to use the excess grain to create the Bowman bourbon legacy.

In 1934, A. Smith Bowman broke ground on the distillery on the farmland, turning it into a family business along with his two sons. He produced the first-ever batch of Virginia Gentleman. Until the 1950s, the A. Smith Bowman Distillery was the sole producer of legal whiskey in the Commonwealth of Virginia. Currently, the distillery’s main focus has shifted to producing premium handcrafted small-batch spirit and innovative limited editions.

Currently, the historic family-owned distillery has relocated to Fredericksburg, and continue to balance long-standing traditions and innovative, pioneering spirits. In 2016 and 2017, A. Smith Bowman Distillery earned the “World’s Best Bourbon” at the World Whiskies Awards. Following the success of their award-winning limited edition Abraham Bowman Port Finished Bourbon in 2016, this Isaac Bowman Bourbon is aged in charred white oak barrels, then finished in port barrels, the majority of which come from Virginia wineries. The result is a character-rich whiskey with notes of jam, caramel, and spice notes.

Notes of jam, caramel and spice notes echo throughout the palate and on to the finish. 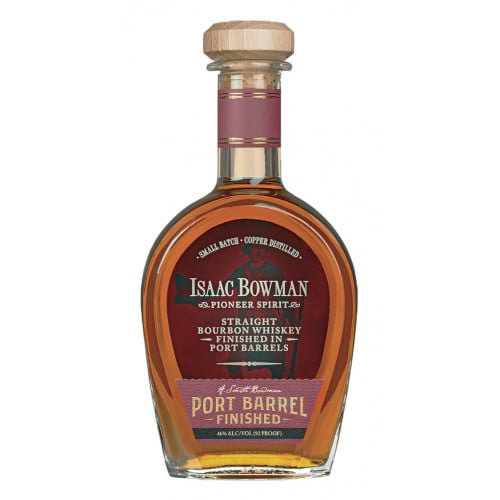