This product is available in: CA, CT, DC, NJ, NY Unfortunately, we can't ship to PO Boxes and APO addresses.

Size750mL Proof86 (43% ABV)
This whisky Gem of Japan is aged for a minimum of 18 years and brought to proof with pure Japanese spring water. Hakushu Distillery, which enjoys a unique microclimate as a result of being surrounded by a forest with nearly 6,000 varieties of plants and ancient granite rocks.
Notify me when this product is back in stock.

This product is available in: CA, CT, DC, NJ, NY Unfortunately, we can't ship to PO Boxes and APO addresses. 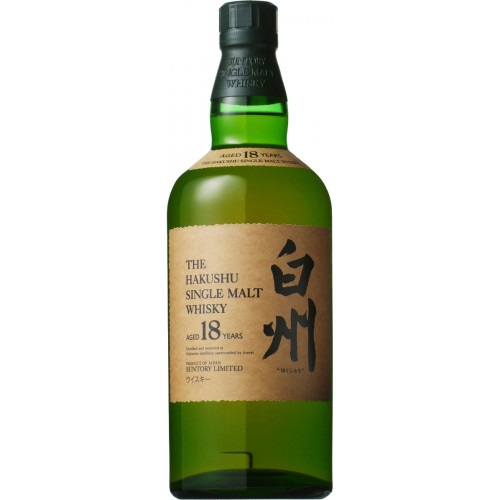 In February 1899, Shinjiro Torii — the father of Japanese Whisky — opened a general store in Osaka, Japan that traded in imported wines. Within a decade, Torii began producing his own sweet grape wine called Akadama Port Wine, which became wildly popular throughout the country. Following the end of World War I, Torri — fascinated by whisky his entire life — decided to expand his business and began construction of the Yamazaki Distillery, Japan’s first-ever whisky distillery.

Fifty years after the construction of Yamazaki Distillery, Keizo Saji inherited his father's vision and began construction of Suntory’s second distillery. Although inspired by traditional Scottish distilleries, both Torii and Saji envisioned a uniquely Japanese approach to distilling whisky. As a result, the Hakushu Distillery is situated amidst the deep forests of Mount Kaikomagatake in Japan’s southern Alps, and enjoys a unique microclimate as a result of being surrounded by a forest with nearly 6,000 varieties of plants and ancient granite rocks.

The Hakushu 18 Year Old Single Malt Japanese Whisky is made exclusively from malted barley, which is milled and mashed with water sourced from the Ojira River and Jingu Rivers (the water has a unique softness and purity, made possible by its filtration through the granite rocks of the Japanese Alps). Once the grains have been mashed, they are fermented by a unique strain of yeast (Hakushu Distillery has thousands of unique strains in its arsenal) in wooden washbacks. Despite the additional cost and labor required, wooden washbacks as compared to stainless steel washbacks take advantage of the distillery’s unique location by incorporating naturally occurring lactic acid bacteria and other microorganisms into the wash.

Following fermentation, the wash is distilled twice through Hakushu’s copper-pot stills before the whisky is laid to rest in the distillery’s warehouses. Once the whisky has aged for a minimum of 18 years, it is brought to proof with pure Japanese spring water. As a result of the whisky’s slumber in Japan’s deep forests, Hakushu 18 Year Old Single Malt Japanese Whisky has a fruity aroma, with hints of orange, pear and dry smoke. Notes of pastries, baking spices, and honey buns dominate the palate, and lead to a finish accented by touches of smoke and cinnamon.

Fruity aroma, with hints of orange, pear and dry smoke. Notes of pastries, baking spices, and honey buns dominate the palate. Finish accented by touches of smoke and cinnamon.