Size750mL Proof86 (43% ABV)
Aged most recently at the Stitzel-Weller Distillery, this bourbon spent one-and-a-half decades in oak barrels before being hand-bottled in Tullahoma, Tennessee. 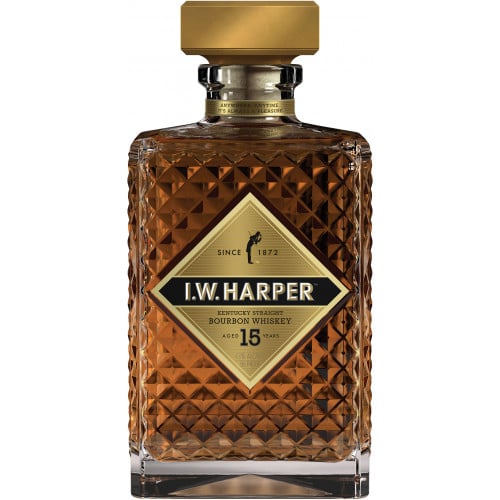 Bernheim then moved to Paducah, Kentucky and became a bookkeeper for a liquor wholesaler, eventually saving enough money to bring his brother Bernard to the United States. In 1872, Isaac and his brother established their own company — Bernheim Brothers — and together purchased a distillery in Louisville, Kentucky and began to produce I.W. Harper Bourbon. While I.W. stood for “Isaac Wolfe,” the given name of the older Bernheim, the brothers chose the name “Harper” over their own surname because it, “sounded more American.”

Bernheim Distillery was one of just ten distilleries granted permission to operate during Prohibition for medicinal purposes, and I.W. Harper Bourbon grew in popularity throughout the 20th century until it was cleared from U.S. shelves in the early 1990s. For the first time in over two decades, I.W. Harper has only been made available again in the recent years.

I.W. Harper 15 Year Old Kentucky Straight Bourbon Whiskey was distilled at the current Bernheim Distillery in Louisville, Kentucky from a mash of 86% corn, 6% rye, and 8% barley. After distillation, the bourbon was aged most recently at the Stitzel-Weller Distillery (also in Louisville) before being hand-bottled in Tullahoma, Tennessee.

As a result of its one-and-a-half decade beauty rest, I.W. Harper 15 Year Old Kentucky Straight Bourbon Whiskey has an aroma of mint chocolate and cinnamon spice, along with big notes of oak and dried fruit. The palate is filled with sweet, citrus notes, particularly candied oranges and caramel, and leads to a robust finish accented by charred wood and clover honey.

We only have a limited quantity of this spectacular bourbon available.

Aroma of mint chocolate and cinnamon spice, along with big notes of oak and dried fruit. The palate is filled with sweet, citrus notes, particularly candied oranges and caramel, and leads to a robust finish accented by charred wood and clover honey.

3.5 out of 5
(2 reviews)
Write a review
Real email address is required to social networks
Sign in
Login with Google
Login with Facebook
Or
We also recommend