Rating:
100%
1
Size750mL Proof83.6 (41.8 % ABV)
This organic, grain-to-bottle single malt is crafted on the tiny island of Hven that lies in the Øresund strait between Sweden and Denmark. Named after the famous astronomer that used to live on the island, the Swedish whisky is matured in 3 different oak casks.
Notify me when this product is back in stock. 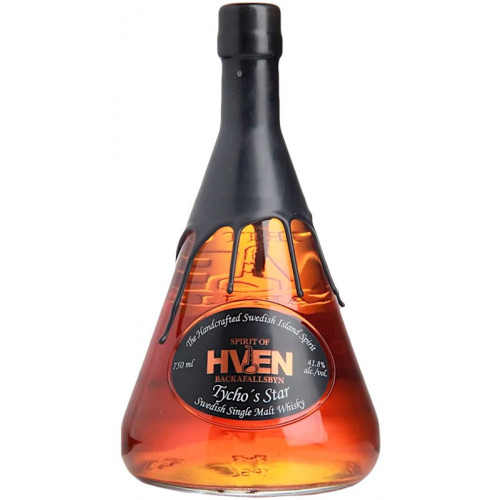 Hven is a tiny Swedish island that lies in the Øresund strait between Sweden and Denmark. Only 371 inhabitants live on the tiny island that is best known for once being the home of Tycho Brahe, the 16th-century astronomer known for his accurate observations that are considered far ahead of their time. The island is known for its rich agricultural heritage with some of Sweden's finest agricultural products grown there. Therefore, it's the perfect place for a distillery ― Spirit of Hven is part of a resort that includes a hotel, restaurant, and pub.

The family-owned grain-to-bottle distillery is run by Henrik Molin and produces Tycho's Star, a Swedish organic single malt whisky. Named after the famous astronomer, it's a rich spirit with notes of leather, licorice, ripe plums, apples, and elderflowers. Tycho's Star is a reference to a supernova that Brahe observed, naming it "De Nova Stella", coining the term for new stars.

The whisky is crafted with a mash bill of 3 types of barley, pale ale malt for the grassy notes, chocolate malt for caramel notes, and heavily-peated malt for the leather, licorice, and tar aromas. It matures in casks made of air-dried oak: 58.2% are heavily-charred casks from Missouri, 33.44% are heavily-toasted Allier casks, the rest are medium-toasted ones from Bourgogne. The certified organic whisky is bottled on-site without chill filtering, coloring, or additives at 83.6 proof, each bottle numbered and wax sealed by hand.

Get your bottle of this unique Swedish single malt today!

The nose opens with a balance of fruit and hints of smoke, barley, coconut, and almonds. On the fresh and sweet palate, you'll find notes of peat, malt, and oak, with floral undertones. The finish is soft with hints of hay and honeydew.