Size750mL Proof112 (56% ABV)
This cask strength whiskey was aged at the epicenter of a 6.0 magnitude earthquake in Sonoma County.
Notify me when this product is back in stock. 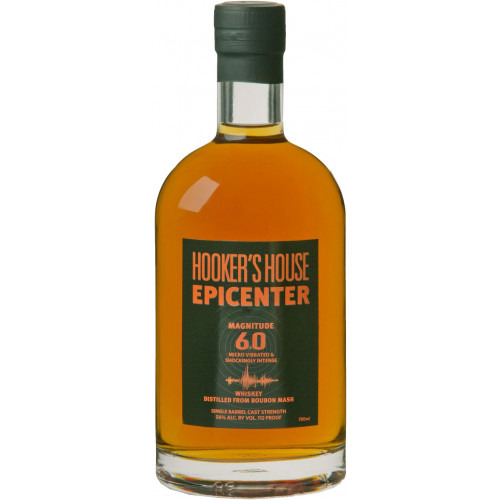 Born in Kentucky and finished in Sonoma County, the Hooker’s House brand pays tribute to Joseph “Fighting Joe” Hooker, an infamous Union General during the American Civil War. Although Hooker’s decisions on the battlefield were often questioned, his love of whiskey and women were not.

On August 24th, 2014, a 6.0 magnitude earthquake rocked Sonoma County and the greater Napa region of California. The precise epicenter of the earthquake was located less than three miles from Prohibition Spirits’ Sonoma Rick House, and while the distillery was lucky that none of its precious whiskey was destroyed during the disaster, several barrels were found balancing precariously in the aftermath. While these barrels of high-rye bourbon were marked for Prohibition Spirits’ bourbon program, it was apparent that mother nature had other plans.

Along with the macro vibrations experienced during the earthquake, these barrels experienced hundreds of additional micro vibrations resulting from aftershocks over the next several months. Finished in French oak staves, Hooker’s House Epicenter Single Barrel Cask Strength Whiskey is a truly one-of-a-kind release.

The whiskey has intense aromas of peaches, cinnamon and shaved almonds, which lead to a full body marked by notes of whipped cream, pie crust, pepper and and caramel. The finish, bold and smooth, has notes of cornbread and strawberry jam.

Pick up a one-of-a-kind whiskey today!

Intense aromas of peaches, cinnamon and shaved almonds, which lead to a full body marked by notes of whipped cream, pie crust, pepper and and caramel. The finish, bold and smooth, has notes of cornbread and strawberry jam.