Learn more
Size750mL Proof91.8 (45.9% ABV) *Please note that the ABV of this bottle may vary
VALKYRIE: Chairman’s Trophy Winner for Best Island Single Malt of 2017 with a score of 99/100 is the first release in the special Viking Legend trilogy created in partnership with renowned Danish designer, Jim Lyngvild. This very limited edition celebrates the rich Nordic heritage of the iconic distillery’s Orkney Islands home.

Matured in a combination of American oak sherry, American oak bourbon and Spanish oak sherry casks, VALKYRIE is a powerful single malt with a smoldering smokiness, richness, and depth. A befitting homage to the fiercest of characters in Norse mythology.
Notify me when this product is back in stock. 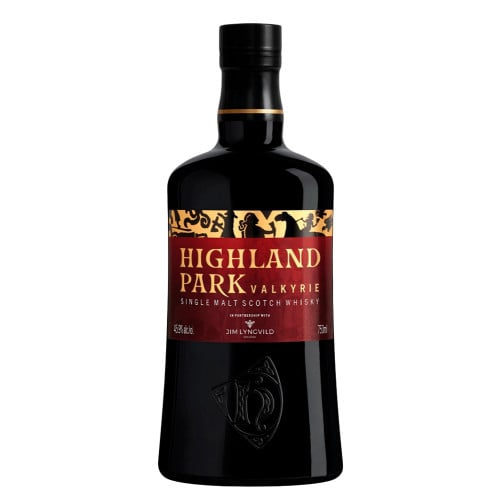 Triple matured in American oak sherry, American oak bourbon and Spanish oak sherry casks, VALKYRIE dials up the aromatic Orcadian peat resulting in a richer level of honey sweetness on the palate than Highland Park 12 Year Old. The result is an exquisitely balanced whisky with notes of stone fruit, spice and lingering aromatic smokiness. VALKYRIE was awarded 99/100 and the Chairman’s Trophy for Best in Category by the 2017 Ultimate Spirits Challenge and a Gold Medal at the 2018 San Francisco World Spirits Competition.