Learn more
Size750mL Proof96(48% ABV) *Please note that the ABV of this bottle may vary
This distinctive peat anomaly comes from the dark, mysterious warehouses of The Macallan distillery.
Notify me when this product is back in stock. 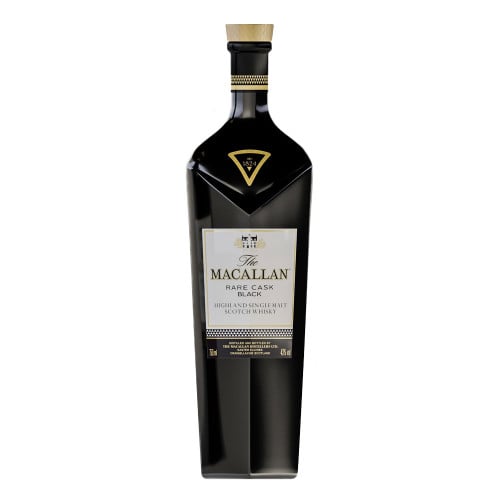 This is a rare Macallan unlike any other. Launched as part the 1824 Master Series, this expression is a selection of handpicked 100% sherry-seasoned European and American oak casks. For this limited edition smoky expression, less than 100 casks maturing at The Macallan distillery were used to age this distinctive whisky. These mysterious casks remained untouched in the dark warehouses of The Macallan under the meticulous watch of Macallan’s Master Whisky Maker.

There are very little in existence - and once used these casks will be no more. Incredibly unexpected and distinctive in flavor with full-bodied richness from the Macallan spirit, Rare Cask Black is an unusual smoky spirit that tells a story of creativity and innovation. This whisky tells a different story of The Macallan spirit and casks, but more than that it tells a story of rarity.

Intense flavors of timeless peat smoke on the nose. A beautiful combination of dried fruit aromas, nutmeg, ginger and beautifully polished oak plus dates, figs, and raisins, heavy but sweet. On the palate, a dry smokiness reveals itself yielding to softer oak tones. The finish is long and fruity with elegant wood smoke.