Learn more
Size750mL Proof84.4 (42.2% ABV) *Please note that the ABV of this bottle may vary
Highland Park Orcadian Vintage Series 1964 is the oldest and rarest of the Vintage Series. This distinctive and refined dram has been pulled from just two casks, yielding a scant 290 bottles.
Notify me when this product is back in stock. 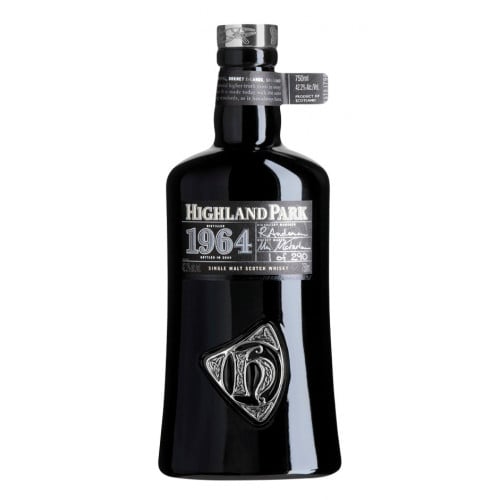 Highland Park distillery was founded by Whisky smuggler Magnus Eunson in 1798 and legend has it that he used his position as a church officer to conceal Whisky beneath the pulpit to keep it out of sight of interfering governmental types. What we do know for sure is that Highland Park is the northerly most distillery in Scotland — sitting way out on the island of Orkney in the far North Sea, just below the Arctic Circle. It’s as close to Iceland as it is to London.

Because the name is “Highland Park,” it may be easy to think that means their whisky is made in the Highland style. But it’s quite different. In character, their spirit is closer to a midpoint between Lowland style and peated Islay single malts. And it’s signature style and dedication to superior quality keep it broad range of whiskies in high demand. In fact, spirits journalist and whisky legend Michael Jackson called Highland Park, “The greatest all-rounder in the world of malt whisky.”

We’ve said it before, but it bears repeating. Highland Park as a fabulous inventory of rare and old casks — it’s one of the best in the business. This allows them to create some truly unique offerings, including the releases in their Orcadian Vintage Series.

Two refill casks of Highland Park single malt — #8737 and #8738 — were tipped in 2009 to fill 290 bottles of rare, forty-five year old whisky. most of those have sold off… there are only a few left. Highland Park Orcadian Vintage Series 1964 is a piece of single malt history and it’s the oldest and rarest in the series. If you want a very special whisky to celebrate with or simply want to own a piece of that history expressed in fine amber drams, this is for you.

Aromas of English toffee and strawberry jam fill the nose. The taste sparkles with gingerbread, crème brûlée, vanilla, fresh cinnamon and peat smoke. The finish is long and… historic.