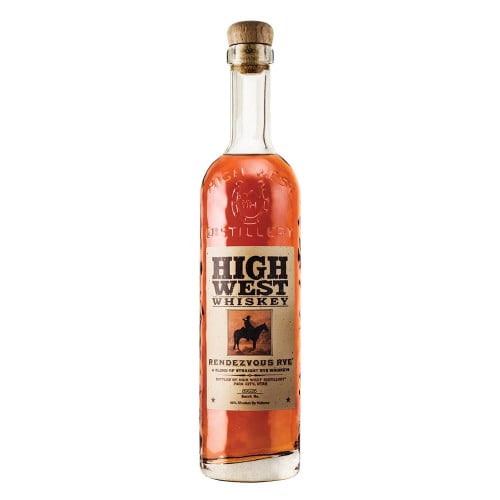 Situated at the bottom of the Quitting Time Ski Run in Park City, High West Distillery & Saloon is the first distillery in Utah since Prohibition and the only ski-in gastro-distillery in the world. "We wanted to call High West a "saloon," says David Perkins, High West's founder, "because we wanted to pay homage to the history of saloons in the old West and the important role they played in each and every town that had one. The saloon was the main meeting place where town hall was held, important announcements were made, and people went to eat and drink. We want people to share that sense of community and friendship over High West."

High West Rendezvous Rye celebrates the first gathering of American frontiersman in Utah's Cache Valley. The "rendezvous" allowed the pioneers to trade pelts, weapons, supplies and homemade spirits. Rendezvous Rye is a marriage of two exotic straight rye Whiskeys — one old and one new. The Whiskey is made by marrying together the rich and aromatic flavors of sixteen year-old rye Whiskey (made from a mash of 80% rye, 10% corn and 10% malted barley) with the bold and spicy flavors of six year-old rye Whiskey (made from a mash of 95% rye and 5% malted barley). As a result, the rye has a bold aroma of cinnamon, crisp mint and fennel that is complemented by soft, rounded notes of rye toast. Sweet notes of caramel, vanilla and macaroons complement the notes of woody spices on the palate, and lead to a warming finish.

High West Rendezvous Rye earned a score of 95 points from Whisky Advocate, which named it one of the Top 10 New Whiskies of the Year. The Whiskey also earned a score of 94 points from Robert Parker's Wine Advocate, and the Double Gold Medal at the San Francisco World Spirits Competition. In addition, Rendezvous Rye earned the title of "Best Rye Whiskey" at the American Distilling Institute Craft Whiskey Competition in 2010.

"I'm a Whiskey guy," says David Perkins, High West's founder who was named Whiskey Advocate's Whiskey Pioneer of the Year in 2011. "I wanted High West to be a Western brand. A Rocky Mountain brand. That was important to me."

Bold aroma of cinnamon, crisp mint and fennel that is complemented by soft, rounded notes of rye toast. Sweet notes of caramel, vanilla and macaroons complement the notes of woody spices on the palate, and lead to a warming finish.