Size750mL Proof100 (50% ABV)
Aged for a minimum of ten years, this bourbon was called "magnificent" by Jim Murray, author of the Whisky Bible.
Notify me when this product is back in stock. 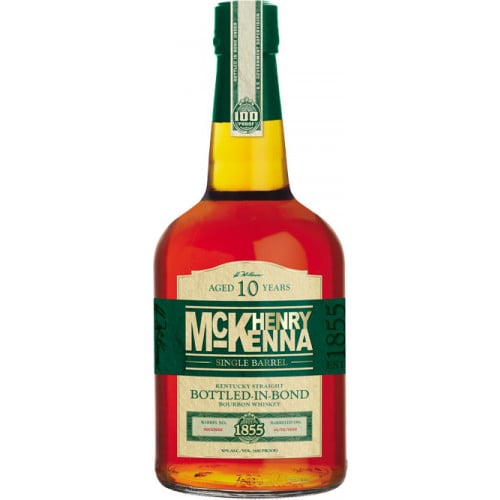 Today, Henry McKenna Single Barrel 10 Year Old Kentucky Straight Bourbon Whiskey honors the rich family tradition and pioneering spirit of the McKenna family. The bourbon, which is made from a mash of primarily corn, is the only extra-aged bottled-in-bond single barrel bourbon available today. Pursuant to the Bottled-In-Bond Act of 1897 (27 C.F.R. 5.21), any spirit labeled as "Bonded" or "Bottled-in-Bond" must be the product of one distiller at one distillery during one distillation season. In addition, the Act requires that bonded spirits be aged in a federally bonded warehouse under U.S. government supervision for at least four years and bottled at 100 proof.

Henry McKenna Single Barrel Bourbon Whiskey is matured for a minimum of forty Kentucky seasons (ten years) before each bottle is filled and labeled with its batch and bottle number. As a result of its extra-long maturation period, the bourbon has an aroma of warm spices, smoke and burnt caramel. The aroma gives way to notes of chewy leather, chilli peppers and habanero, which are complemented by subtle touches of dried fruits, vanilla and cinnamon. The finish is warm and lush, with bold notes of roasted corn, cloves and woody spices. Since each bottle of McKenna's Single Barrel Bourbon is bottled from a single cask rather than being crafted from a batch of casks, however, each bottle is slightly different and entirely interesting.

Henry McKenna 10 Year Old Bourbon was named one of the top 12 spirits ever tasted by Proof66 and was called "magnificent" by Jim Murray, author of the Whisky Bible. In addition, the bourbon earned a score of 90-95 points from Wine Enthusiast.

Heaven Hill distillery was founded in 1935, immediately after Prohibition ended in the United States in 1933, after a group of investors, including the famous Joseph L. Beam, decided to be ready for the rebounding market. It's located on a massive estate boasting 22 multi-story rick-houses across hundreds of acres of land. Now known as the "Heaven Hill Bernheim Distillery," they have the second-largest inventory of Bourbon Whiskey in the world. It is also the only remaining large-scale family-owned distillery in Kentucky.

In 1837, Henry McKenna emigrated from Ireland to the United States. After spending nearly two decades as a farmer in Kentucky, McKenna founded the eponymous distillery in 1855. At the time, McKenna focused on the production of wheat whiskey (the only crop he was harvesting at the time) and was able to distill enough whiskey to fill one barrel each day. As word of McKenna's high-quality whiskey spread, he was able to triple his distillation capacity and began experimenting with bourbon production. Following his death in 1893, McKenna's three sons — Daniel, Stafford, and James — began operating the business.
Explore all Henry Mckenna bottles >>

Aroma of warm spices, smoke and burnt caramel. Notes of chewy leather, chili peppers and habanero, which are complemented by subtle touches of dried fruits, vanilla and cinnamon. Finish is warm and lush, with bold notes of roasted corn, cloves and woody spices.

3.8 out of 5
(5 reviews)
Write a review
Real email address is required to social networks
Sign in
Login with Google
Login with Facebook
Or
We also recommend