Rating:
87%
4
Size750mL Proof86.8 (43.4% ABV)
From Master Distiller Lesley Gracie’s “Cabinet of Curiosities” collection, this ethereal Hendrick’s Gin is inspired by the “mysterious and ephemeral delights” of floral blooms during the summer solstice.
Notify me when this product is back in stock. 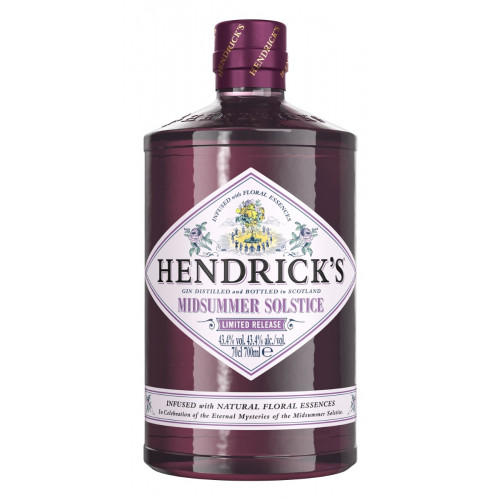 Born in December 1839, William Grant became a cattle herder at the age of 7 in order to supplement his family's income. As a teenager, Grant apprenticed as a cobbler and a clerk, and in 1866, he joined Mortlach Distillery as a bookkeeper. For the next two decades, Grant managed the affairs at the distillery, while secretly learning the art of distillation. In 1886, he resigned from his position as distillery manager and, together with his seven sons, two daughters and one sporadically working stonemason, built his family distillery in Scotland.

Hendrick’s Gin is made in small batches of 500-liters or less, with both the Bennett and Carter-Head stills working their magic on Hendrick’s unique mix of botanicals, which include yarrow, elderflower, juniper, angelica root, orange peel, caraway, coriander, chamomile, cubeb berry, orris root and lemon. After distillation, Hendrick’s Gin is infused with Bulgarian Rosa Damascena and specially selected cucumbers — an odd combination which produces miraculous results.

Hendrick's Midsummer Solstice is a limited edition Gin inspired by the Midsummer Solstice blooms, which gives Hendrick's signature house blend a distinctive floral take. The result is a captivating floral Gin that blooms onto the palate in a harmony of lightness and complexity. An alluring floral twist on Hendrick’s hallmark taste.

4.4 out of 5
(4 reviews)
Write a review
Real email address is required to social networks
Sign in
Login with Google
Login with Facebook
Or
We also recommend