Learn more
Size750mL Proof90 (45% ABV) *Please note that the ABV of this bottle may vary
Crafted using English cucumbers, peeled by hand, and slowly infused with 9 other botanicals, this gin earned the Double Gold Medal at the San Francisco World Spirits Competition. 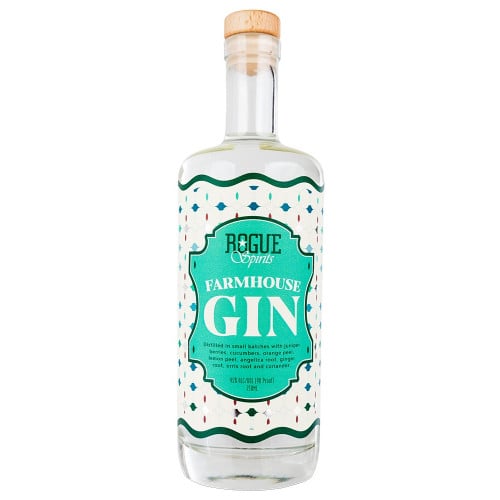 In 1988, near a scenic stream called Lithia Creek in Ashland, Oregon, Jack Joyce and Bob Woodell, fraternity brothers at the University of Oregon, opened the doors to Rogue Brewery. For fifteen years, Rogue Brewery brewed beers such as Dead Guy Ale, Dad's Little Helper and Brutal IPA under the tutelage of John Maier, Rogue Brewery's brewmaster.  Then, with the addition of Master Distiller John Couchot, Rogue Spirits was born.

Couchot, who earned a bachelor's degree in chemistry at Evergreen State College in Washington, was a professional chemist for six years before jumping ship to make spirits. Working with a custom-made, 150-gallon Vendome copper-pot still at the Rogue House of Spirits on the banks of the Pacific Ocean, Couchot created Rogue Farmhouse Gin.

The gin is crafted using English cucumbers, peeled by hand, and slowly infused with 9 other botanicals. The botanicals, blended together without any chemicals, additives or preservatives, deliver a gin with a fresh character and bold layers of flavor.

Bottled at 90 proof, this gin is perfect to be drank on its own, or in different cocktails. Much like the name suggests, Rogue Spirits does things differently.

Strong notes of spruce and cucumber. Hints of ginger and citrus.