Size750mL Proof93 (46.5% ABV)
Aged in oak barrels for four months, this gin earned the highest rating the Beverage Testing Institute has awarded any gin in the past five years.
Notify me when this product is back in stock. 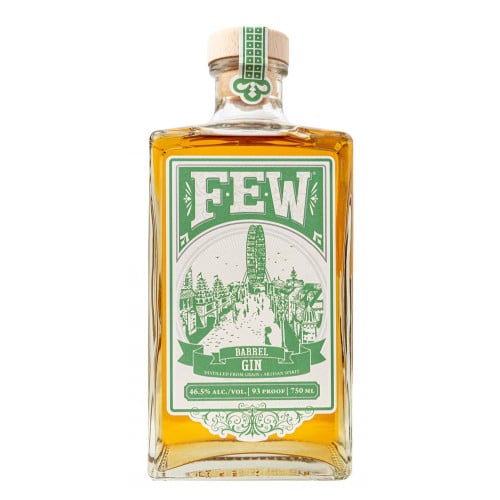 Today, hidden down a dark alley in a former chop shop, Hletko and his skilled team are producing another batch of FEW Spirits Barrel-Aged Gin. The gin is crafted from a mash of corn, wheat and unmalted barley, which is infused with a secret recipe of botanicals, each individually selected for the way it interacts with wood. As its name suggests, FEW Barrel-Aged Gin is laid to rest for four months in five-gallon, new American oak barrels which have been toasted with a #3 char. As a result, the gin has a soft amber color, and a nose filled with liquorice candy, citrus and clove. The palate is earthy and balanced, with flavors of fresh grain and sugar complemented by light, oaky undertones. The finish is soft and delicate, with notes of caramel and brown sugar.

Bottled at 93 proof, FEW Barrel-Aged Gin earned a Gold Medal from the Beverage Testing Institute, where it was the highest rated gin in the last five years.

Soft amber color, and a nose filled with liquorice candy, citrus and clove. Palate is earthy and balanced, with flavors of fresh grain and sugar complemented by light, oaky undertones. Finish is soft and delicate, with notes of caramel and brown sugar.