Size750mL Proof90 (45% ABV)
This one-of-a-kind gin is made with just four botanicals: juniper, red bell pepper, black pepper and pimento.
Notify me when this product is back in stock. 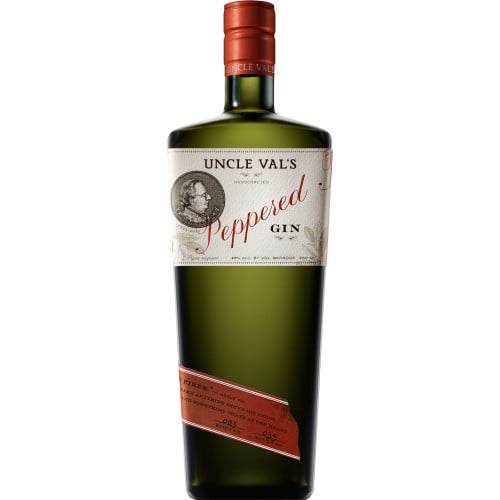 In 1895, Samuele Sebastiani emigrated to the United States from Tuscany. A stonemason by trade, he quarry-mined the hills of Sonoma, California for cobblestones that were used to build the streets of San Francisco. He worked long hours, lived frugally and saved carefully, and in 1904, purchased enough land in Sonoma to open the doors to Sebastiani Winery. Sebastiani Winery was the only winery in Sonoma to remain open during Prohibition, and, as the Great Depression set in, Samuele carried out major construction projects in Sonoma — including building an ice-skating rink and hotel — in order to create jobs.

Today, August Sebastiani, Samuel's great-grandson, is the President of 35 Maple Street Distillery, the makers of Uncle Val's Restorative Gin. The gin is named after Vaerio Cecchetti, Sebastiani's favorite uncle and a retired physician near Lucca, Italy. "In addition to being a highly regarded doctor, Uncle Val is a great cook and avid gardener," says Sebastiani.

While Uncle Val's Botanical Gin is crafted from a botanical bill composed of five ingredients (juniper, lemon, sage, lavender and cucumber), Uncle Val's Peppered Gin uses only four botanicals: juniper, red bell pepper, black pepper and pimento. Sebastiani uses immersion bags (think big tea bags) in order to infuse the gin with the flavors from the botanicals. The immersion bags are steeped in the gin for several hours, although some remain in the gin longer in order to impart a heavier aroma and flavor.

The juniper adds a classic element of tartness and crispness to the gin. From there, Uncle Val’s Peppered Gin becomes something entirely its own. The roasted red peppers add a unique earthiness, while the black pepper adds a clear spice that’s balanced by a savoriness gleaned from the pimento. After the gin is distilled five times over, Sebastiani's team filters it using carbon and lava rock (or pumice), which has a porous density that's perfect for filtering gin. Then, the gin is brought to proof using naturally sweet spring water from the Cascade Mountains before being bottled and labeled by hand.

"Gin was invented in the Netherlands by a doctor, Franciscus Sylvius, who was a professor of medicine in Leyden, Holland, back in the 1650s," Sebastiani says. "He was trying to find a cure-all for kidney and stomach disorders, so he infused juniper berries into distilled spirits. The elixir became so popular that distillers began commercial production and by the end of the 1680, the Dutch were exporting more than 10 million gallons of gin each year. Gin is the only spirit that started out as a medicine, so it's fitting that we named ours after Uncle Val."

Uncle Val's Peppered Gin is truly unlike any other gin on the market.

Crisp, earthy aroma of juniper, followed by smoky bell peppers and a clear, peppery spice on the palate. Finish is a touch smoky, with plenty of savoriness to go around.