Size750mL Proof90 (45% ABV)
Distilled from Lakefront Pumpkin Lager, this spirit is aged in used bourbon casks and sealed with orange pumpkin wax.
Notify me when this product is back in stock. 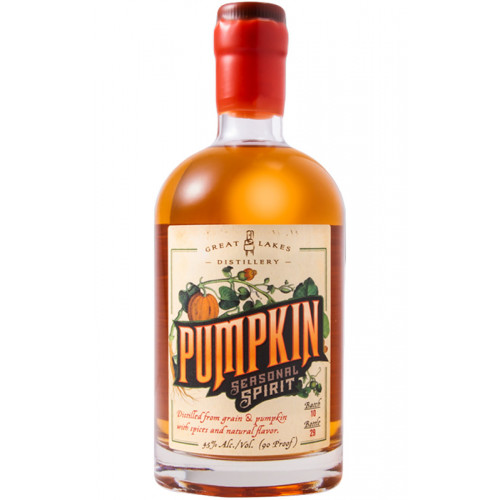 In the spring of 1812, as tensions grew between the United States and Great Britain (ultimately culminated in the War of 1812), Thomas Jefferson was enjoying his retirement from public life at his estate in Monticello. As construction was underway on his brick garden pavilion, Jefferson — using malt he purchased from his neighbor and hops he bought locally — began brewing beer at his home in Virginia.

Nearly two centuries later, Lakefront Brewery owner Russ Klisch was reading a dusty brewing tome and discovered a recipe that Jefferson had used to brew pumpkin beer. Klisch seized the recipe and the opportunity immediately and created Lakefront Pumpkin Lager — the only pumpkin lager made anywhere in the world. Made with real pumpkins and a blend of proprietary spices including cinnamon, nutmeg and cloves, Klisch brews Lakefront Pumpkin Lager for a full four weeks. The extra brewing time gives Lakefront Pumpkin Lager a frothy entry and a deep, smooth richness. The lager's notes of cinnamon, nutmeg, cardamom and nutty toast intensify when Guy Rehorst, Great Lakes Distillery's master distiller, takes over.

Rehorst made fewer than 3,600 bottles of Pumpkin Spirit this year. It's only available for a limited period of time and in extremely limited quantities! Pick up a bottle today!

Aroma of pumpkin and hints of cinnamon and nutmeg reminiscent of autumn. Notes of dry malt together with pumpkin and toffee predominate, with hints of vanilla from the bourbon barrels.