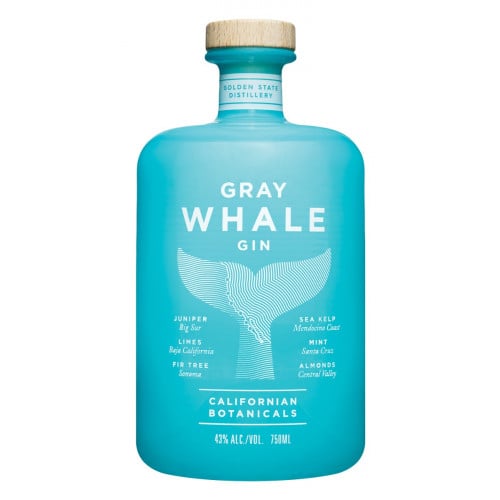 Golden State Distillery is the passion project of husband-wife team Marsh Mokhtari and Jan Livingston. Marsh has lived a life of adventure stretching from Australia to Africa and back again — eventually landing him as an actor in Hollywood. Jan is a creative director in the industry as well. They launched Golden State Distillery in 2016 to some fanfare — winning the Brand Battle at the 75th Annual Wine & Spirits Wholesalers of America Convention.

Their first — and so far only — product is Gray Whale Gin. Before the infusions, the core spirits are distilled seven times to ensure that the base spirits achieves neutrality. And they have continued their appreciation for their home state of California by developing a range of botanical infusions that presents a true taste of the Golden State. Specifically, there are six locally-derived botanicals, including Juniper from Big Sur, limes from Baja California, fir tree sprouts from Sonoma, Kombu sea kelp from Mendocino, mint from Santa Clara, and almonds from the Central Valley.

Two of those ingredients we’ve never seen in Gin before. The kelp — a traditional Japanese ingredient — brings a unique umami savoriness while the almonds add a warm nuttiness. Taken all together, this Gin delivers a California flare and lends itself perfectly to the Dirty Martini, the Gibson, and it makes a savory Gin and Tonic.

Proudly, Gray Whale Gin is gluten-free and produced in small batches using sustainable harvesting and production methods. And a portion of all sales go to support eco-friendly projects to preserve and protect the ocean they love.

As you approach Gray Whale Gin, you are greeted by lime zest on the nose, then juniper and coastal fir tress. On the palate the mint and savory umami arrive with almond marzipan at the finish.