This product is available in: CA, FL, NE, NH, NY Unfortunately, we can't ship to PO Boxes and APO addresses.

Size1750mL Proof84 (42% ABV)
Named after the famed pre-Prohibition cocktail, "The Aviation," this inspired gin has a bright flavor, with a smooth juniper base, and botanical-forward profile, followed by a subtle, clean finish.
Notify me when this product is back in stock.

This product is available in: CA, FL, NE, NH, NY Unfortunately, we can't ship to PO Boxes and APO addresses. 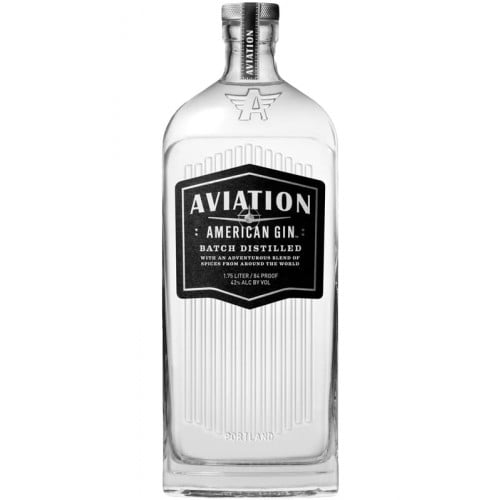 Aviation American Gin was first produced in Portland Oregon in 2006. The company was founded by distiller Christian Krogstad and bartender Ryan Magarian. These founders were the first recognized distiller/bartender partnership in the United States. Aviation American produces an American dry gin, which is known for its less juniper-forward flavor profile.

They experimented with over 30 different recipes before settling on the recipe that is produced today. The special gin was actually then named after the well-known pre-Prohibition cocktail, The Aviation. The famous cocktail was created in the early 1900s by well-known bartender Hugo Ensslin. This classic cocktail is made with gin, maraschino liqueur, crème de violette, and lemon juice.

The distilled gin was originally bottled in a wine bottle with a blue label. The current bottle is shaped like a flask, inspired by the Art Deco period, adorned with a black label and a silver cap. Produced by House Spirits Distillery, the ratio for the recipe remain secret, but there a seven known botanicals used during distillation: juniper, lavender, sweet and bitter orange peel, cardamom, coriander, Indian sarsaparilla, and anise seed.

The small batch gin is twice pot distilled and bottled at 42% ABV. The seven different natural botanicals that are used for flavoring are steeped in grain spirit for 48 hours, then redistilled in a custom-built 400 gallon pot still, one batch at a time.

The spirit is then brought to proof with deionized Cascade mountain water before bottling. Aviation’s Master Distiller Christian Krogstad credits Aviation's natural ingredients, and low reflux stills, for Aviation's bright flavor. With a smooth juniper base, it has a subtle, clean finish.

Pick up a bottle of Aviation Small Batch Gin today!

Shifting away from the usual overabundance of juniper toward a more forward balance of botanicals, Aviation explores the rich, floral and savory notes of lavender, cardamom, and sarsaparilla to capture the lushness, spice, creativity, and freshness of the Pacific Northwest.