Learn more
Size750mL Proof80 (40% ABV) *Please note that the ABV of this bottle may vary
Grant's Triple Wood blended whisky gets additional smoky notes with this expression that contains peated whiskies. Bottled at 80 proof, its peat component is balanced with fruity, nutty, and citrusy notes.
Notify me when this product is back in stock. 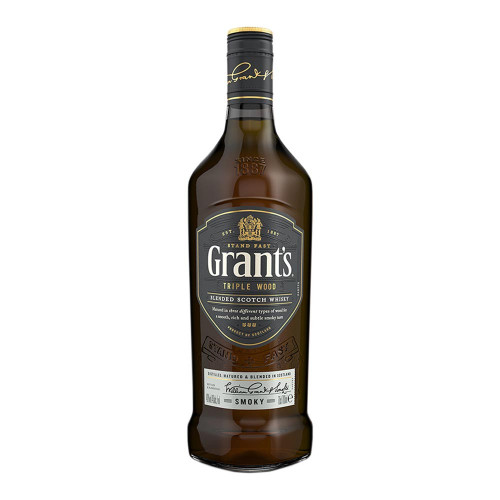 The Grant's Triple Wood Smoky Whisky expression is a blend of malt and grain whiskies that were matured in 3 different barrels: virgin oak, American oak, and refill bourbon. Chosen by Master Blender Brian Kinsman, the final blend contains peated whiskies that add a subtle smokiness to the expression. The blended whisky is bottled at 80 proof.

Get your bottle of the triple-wood Grant's with a smoky twist today!

The smoke is immediately apparent on the nose along with fruit, oats, and a touch of nuttiness. The smoke is subtle on the palate with the fruit taking the center stage and a touch of citrus in the background. The finish is smooth and tannic with a touch of smoke.