This product is available in: CA, DC, MN, ND, WA Unfortunately, we can't ship to PO Boxes and APO addresses.

Size750mL Proof92 (46% ABV)
This unique Flemish whisky has earned several accolades, including “Best Belgian Single Malt” at the 2018 World Whiskies Awards, and first place “Master,” at the 2017 World Whisky Masters.
Notify me when this product is back in stock.

This product is available in: CA, DC, MN, ND, WA Unfortunately, we can't ship to PO Boxes and APO addresses. 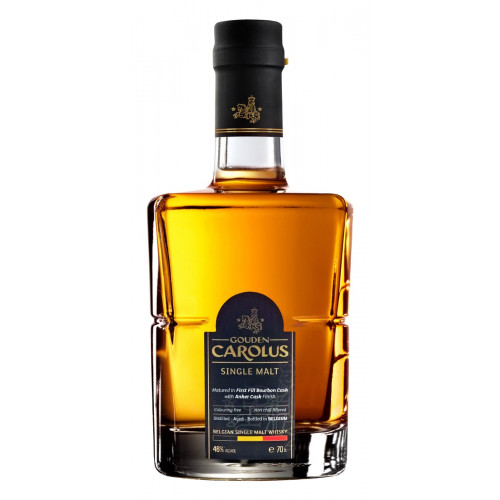 Het Anker Brewery is a Flemish brewery in Mechelen, founded in 1471 by a community of Beguines. The renowned brewery was renamed "Gouden Carolus" (Golden Charles) in 1960, after Charles V, Holy Roman Emperor who was raised in Mechelen. The brewery is home to the world-famous Gouden Carolus Tripel Belgian beer.

In 2010, they constructed a fully operational whisky distillery (Distillery De Molenberg) which was built and in Blaasveld, on a 17-century family farm. Distilled from the mash of Gouden Carolus Tripel, Gouden Carolus Single Malt was launched on November 23, 2013, and has already received much critical acclaim.

Gouden Carolus Belgian Single Malt Whisky is matured in first-fill bourbon casks and finished in 'Anker' oak casks, custom reworked by the cooper according to precise specifications. The result is a refined whisky with a rich and balanced taste. The subtle fruit aromas are delightfully enhanced by hints of wood and vanilla.

This unique Flemish whisky has earned several accolades, including “Best Belgian Single Malt” at the 2018 World Whiskies Awards, first place “Master” at the 2017 World Whisky Masters, and a Gold Medal at the 2017 International Spirits Challenge.

Rich and balanced notes all throughout the nose and palate. The subtle fruit aromas are delightfully enhanced by hints of wood and vanilla.