Size750mL Proof83 (41.5% ABV)
This ultra-premium rum is a combination of 14 and 18 year old pot and column-distilled rums that were aged separately, blended together, and then married in American white oak for an additional 2 years in once-used medium-char bourbon barrels. Only 12 barrels were produced, yielding a total of 2592 bottles of this luxurious and elegant spirit.
Notify me when this product is back in stock. 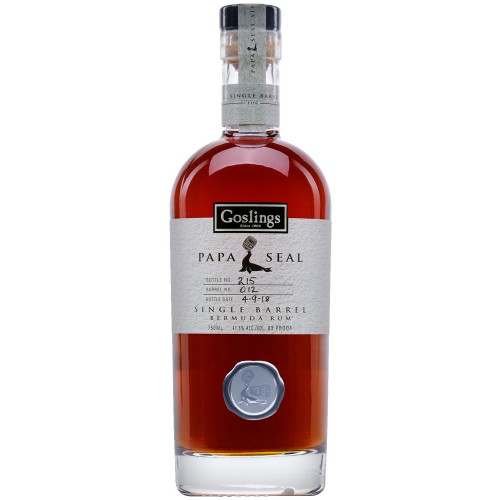 Goslings Papa Seal Rum is their ultra-premium single barrel expression. It's a combination of 14 and 18 year old pot and column-distilled rums that were aged separately, blended together, and then married in American white oak for an additional 2 years in once-used medium-char bourbon barrels, the humid Bermuda air working its magic all the while. Only 12 barrels of this mellow and elegant rum were produced, yielding a total of 2592 bottles. Each cask was carefully hand-picked, every bottle meticulously bottled and labeled by hand.

The luxurious expression has garnered numerous awards, including a 2019 Rum of The Year by the Caribbean Journal and 92 points by Tasting Panel. "Our obsession has always been on crafting the finest rums possible, not the most rums. With that mantra in mind, we proudly created Papa Seal, ‘The Father of all Rums’. My only regret is that we are forced to limit the number of people who can experience it," said Malcolm Gosling, president and CEO, at the launch of the rum. Named after the father of the Goslings family of rum-makers, Malcom Gosling, known among family and friends as "Papa Seal", this expression is one of the few single barrel rums available on the market today.

Treat yourself to one of these limited-edition bottles up today!

It's a mellow yet lavish profile with caramel, spice, vanilla, molasses, dried fruit notes. The finish is clean and super-balanced, with notes lingering.