Learn more
Size750mL Proof83 (41.5% ABV) *Please note that the ABV of this bottle may vary
Following in the footsteps of the first edition, the 2020 Papa Seal is an ultra-premium single-barrel rum. A blend of well-aged pot and column-still rums, only 1500 bottles of this exquisite spirit were produced.
Notify me when this product is back in stock. 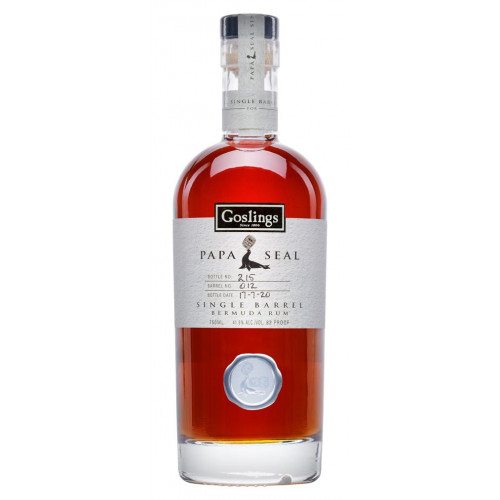 The 2020 Edition of their Papa Seal Rum continues in the vein of its ultra-premium single barrel predecessor, which has garnered numerous awards, including a 2019 Rum of The Year by the Caribbean Journal and 92 points by Tasting Panel. It was named after the CEO and father of the Goslings family of rum-makers, Malcolm Gosling, known among family and friends as "Papa Seal". This second release is a blend of pot and column-still rums that have spent between 10 and 21 years in hand-selected once-used medium-char bourbon barrels.

After blending, the liquid spends an additional 2 years in American white oak, letting the aromas and flavors marry in the humid and salty air of Bermuda. After filtration, the rum is bottled at 83 proof. Only 1500 bottles of this mellow and elegant rum were produced for the US market in 2020. Each cask was carefully hand-picked, every bottle meticulously bottled and labeled by hand. This expression is one of the few single barrel rums available on the market today.

Grab a bottle of this exquisite rum today!

Mellow yet deep and complex, this premium rum has notes of spice, leather, banana, caramel, and molasses, culminating in a satisfyingly long and elegant finish with lingering notes.