Size750mL Proof80 (40% ABV)
The eldest rum of the Gosling’s range, this Family Reserve is essentially their flagship Black Seal, aged for between 16 and 19 years in ex-bourbon barrels. 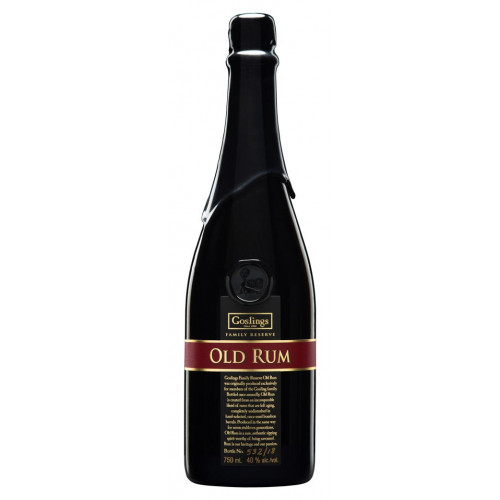 The story of Goslings Rum is a serendipitous one, dating as far back as 1806, when James Gosling ventured out to sea at the request of his father. Gosling was heading towards Virginia, equipped with wines and spirits worth 10,000 pounds Sterling. 91 days into the trip the charter on the ship Mercury ran out, forcing Gosling to settle in Bermuda. Eventually he decided to open a wine and spirits shop on the island, the rest is history.

Upon his return to England in 1824 James Gosling opened a shop with his brother Ambrose, which has been in the Gosling family ever since. Their first rum, the Black Seal, was produced nearly half a century later in 1863. Produced in Bermuda, the Black Seal is synonymous with the island. Today, the family business is in the 7th generation of Goslings, who continue to lead company, as the largest exporter of any Bermuda made product. Goslings is also the only company that blends and bottles on the island.

Over a century and a half later, the family’s patriarch Malcolm Gosling made the decision to reveal the secrets of their family’s successful Caribbean elixir. Goslings Family Reserve Rum is crafted from the same blend of ingredients as their flagship Black Seal Rum. The differentiating factor is the increased amount of time the rum spends inside of the ex-bourbon oak barrels, giving it more complexity and overall depth.

This Family Reserve Rum is the oldest expression from the Gosling’s range. Made in very small batches, it is bottled in the same manner as it was a century ago — in Champagne bottles, sealed with wax.

It has earned numerous awards, including a Double Gold at the San Francisco World Spirits Competition, and named #1 Aged Rum in the World by the Caribbean Journal.

Spicy aromas and notes of molasses, chocolate, leather, and hints of pepper. The palate is smooth and complex with nuanced notes of vanilla, smoke and cigars. The finish is long and spicy, mirroring the nose with notes of spice, oak, tobacco, smoke, and dried fruit. A sipper that is perfect to be drunk with a rich dessert or paired with a cigar.