This product is available in: FL, NH, ND, OK Unfortunately, we can't ship to PO Boxes and APO addresses.

Size750mL Proof80 (40% ABV)
With a gift box that pays tribute to the Pitilie Burn ― Aberfeldy's water source that is famed for its alluvial gold ― this 12-year-old is bound to brighten anyone's day. Give the gift of gold!
Notify me when this product is back in stock.

This product is available in: FL, NH, ND, OK Unfortunately, we can't ship to PO Boxes and APO addresses. 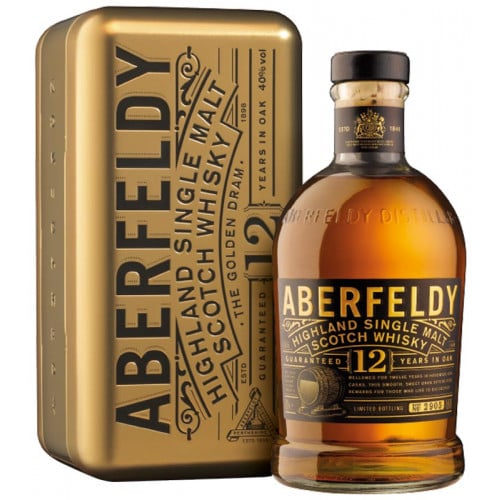 This gift pack holds the bottle in a premium gold-bar-shaped box, which pays tribute to the Pitilie Burn. All the gold does not stop there: this expression's creamy and rich flavor profile has earned the single malt a shiny Gold medal at the 2015 San Francisco World Spirits Competition.

Give the gift of gold today!

Situated along the River Tay, the burgh of Aberfeldy has a population of fewer than 2,000 and is the subject of the famous Robert Burns Poem ""The Birks of Aberfeldy."" In addition, the town is home to the eponymous distillery, which was founded in 1896 by John Dewar & Sons. The distillery was closed during World War I and World War II, as the British government rationed the supply of grains during wartime to ensure an adequate food supply. In 1972, however, the distillery was rebuilt and retrofitted with four new copper pot stills.

Part of The Last Great Malts of Scotland campaign, Aberfeldy whiskies are crafted from water sourced from the Pitilie Burn, famed for its gold deposits. Aberfeldy 12-Year-Old Single Malt Scotch Whisky is made exclusively from barley milled through the distillery's Porteus mill before being mashed and then fermented in stainless steel washbacks. Following fermentation, the whisky is distilled once through Aberfeldy's copper-pot wash stills and then again through its copper-pot spirit stills. Then, this Aberfeldy single malt is matured in a combination of casks previously used to mature bourbon.
Explore all Aberfeldy bottles >>

Notes of incense on the nose, heather honey with a fruity softness, notes of pineapple, toast, and cereal. The palate is full-bodied, syrupy, lingering on the tongue like a liqueur. The finish is full of flavor, with perfumed characteristics and spice, with bitter Seville oranges and a dry finish.