Learn more
Size750mL Proof94.6 (47.3% ABV) *Please note that the ABV of this bottle may vary
After the initial 8-year period of aging in ex-bourbon casks, this spirit gets transferred into rare casks that used to hold Spanish Malaga fortified wine for another 4 years. The whisky obtains rich dried fruit notes and is bottled at 94.6 proof.
Notify me when this product is back in stock.

This product is available in: IL, NV, WA Unfortunately, we can't ship to PO Boxes and APO addresses. 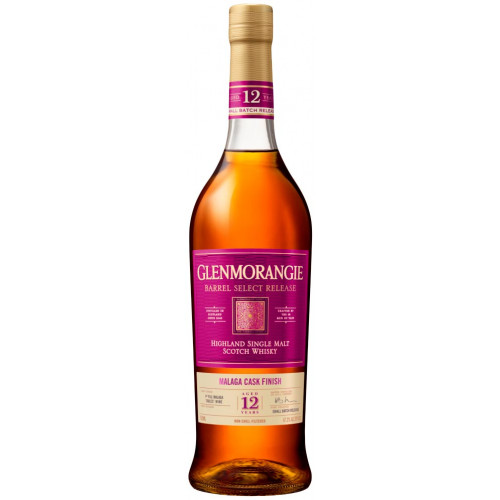 Glenmorangie has several expressions that start their aging in ex-bourbon casks before being finished in more exotic ones. The 12-year-old Malaga Cask Finish is one of these. After its 8 years of initial aging it was transferred to first-fill Spanish Malaga fortified wine casks for an additional 4 years. Malaga is a sweet wine that is made with Pedro Ximenez and Moscatel grape varietals. These casks, chosen by Glenmorangie's Dr. Bill Lumsden, impart the non-chill-filtered whisky with rich dried fruit notes.

The nose opens with a honey sweetness, mead, toffee, and freshly baked bread, as well as red fruit and a subtle herbal touch. It's oily on the palate with sultanas, raisins, dates, honey, brown sugar, citrus, and spice. Finishes long and gentle with a touch of nuts and oak.