Learn more
Size750mL Proof92 (46% ABV) *Please note that the ABV of this bottle may vary
Only 757 bottles of this single malt, which was aged for over 17 years in sherry casks, have ever been produced.
Notify me when this product is back in stock. 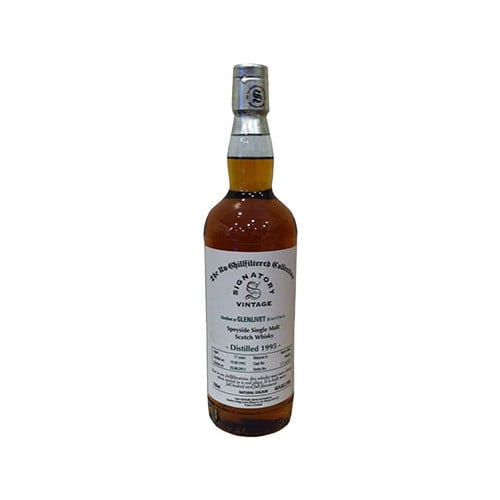 The Glenlivet Single Malt Whisky is made using barley sourced from Crisp Maltings, Portgordon (Portgordon is a village in Moray, Scotland). After the barley has been malted and mashed, it is fermented in wooden washbacks for approximately two days. The wooden washbacks used by Glenlivet are more difficult and expensive to maintain as compared to the stainless steel washbacks used by most Scottish distilleries, but impart a distinctive, floral quality to the whisky. After the barley has been fermented, it is distilled first through one of Glenlivet's wash stills, and then again through one of Glenlivet's spirits stills.

The Glenlivet 17 Year Old Single Malt Scotch Whisky (Signatory Bottling) was distilled on September 19, 1995 and matured for over 6,500 days (17 years) in a cask previously used to mature sherry (Cask # 144354). Following maturation, the whisky was bottled at 92 proof without the use of chill filtration or caramel coloring.

The Glenlivet 17 Year Old Single Malt Scotch Whisky (Signatory Bottling) has a copper reddish color, along with an aroma of sherry, grapes, cherries and plums. The aroma gives way to notes of red fruits, buttered biscuits, caramel and moist tobacco on the palate, and leads to a finish with hints of citrus and clove.

Only 757 bottles of this whisky have ever been produced. Pick one up today!

Copper reddish color, along with an aroma of sherry, grapes, cherries and plums. Notes of red fruits, buttered biscuits, caramel and moist tobacco on the palate. Finish with hints of citrus and clove.