Learn more
Size750mL Proof97.6 (48.8% ABV) *Please note that the ABV of this bottle may vary
Only 6,600 bottles of this limited edition single malt, which earned the Double Gold Medal at the San Francisco World Spirits Competition, will ever be produced.
Notify me when this product is back in stock. 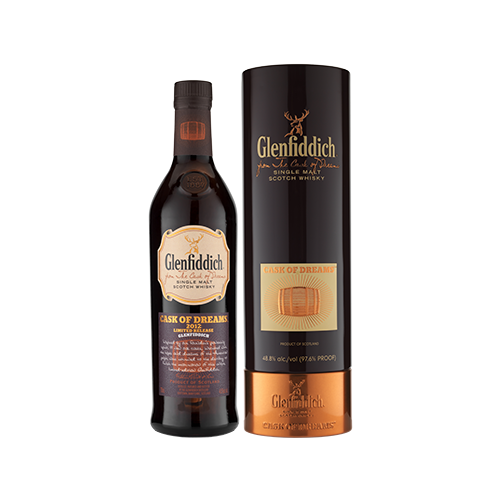 In 1886, William Grant, along with the help of his nine children and a single stone mason, began construction of the Glenfiddich Distillery, situated in the Speyside region of Scotland. After a year of hard labor, the first drop of whisky fell from the distillery's copper-pot stills on Christmas Day 1887. Today, Grant's passion, determination and pioneering spirit continue to guide Glenfiddich Distillery, which is stewarded by the fifth generation of the Grant family. In celebration of the distillery's 125th anniversary, Glenfiddich Distillery coopered eleven casks composed of new, American oak and took the casks to a select number of cities across the United States. The distillery invited whisky fans to write down their dreams and inspirations on the casks themselves, and sign the wood. Once the casks had been inscribed, they were taken back to Scotland and filled with a Glenfiddich Single Malt Scotch Whisky that had already matured for a minimum of 14 years (and up to 16 years) in ex-bourbon casks.

While Scotch has traditionally been matured in used sherry, port and bourbon casks, the use of new American oak casks to finish whisky is another weapon in a distillery's arsenal and allows the whisky to enjoy the sweeter and more complex flavors of virgin wood. "With brand new American oak, wood will have a big influence," says Mitch Bechard, Glenfiddich's brand ambassador. During the finishing process for Glenfiddich Cask of Dreams, the casks were closely monitored by Master Distiller Brian Kinsman, who ensured that the whisky was accented by a vanilla sweetness but well-balanced by fruity aromas and spicy flavors.

Glenfiddich Cask of Dreams has an aroma of stone fruits (particularly plums and peaches) that is balanced by hints of coffee and woody spice. The aroma gives way to bold notes of creamy vanilla, honeyed oak and a malty sweetness, and ultimately leads to a long, caramel finish.

"These eleven casks fulfilled our goal of pioneering an entirely new way to conceive of the whisky-making process," says Bechard, and the "whisky will return home to America to help realize the ambitions of others."

Only 6,600 bottles of this limited edition single malt, which earned the Double Gold Medal at the San Francisco World Spirits Competition, will ever be produced. Pick up a bottle today!

Aroma of stone fruits (particularly plums and peaches) that is balanced by hints of coffee and woody spice. Bold notes of creamy vanilla, honeyed oak and a malty sweetness. Long, caramel finish.