Learn more
Size750mL Proof86.4 (43,2% ABV) *Please note that the ABV of this bottle may vary
This whisky is the conclusion of a trilogy of limited-edition Chinese New Year releases from Glenfiddich. Aged 21 years and finished in Caribbean rum casks, the whisky has earned several Double Gold medals at the San Francisco World Spirits Competition.
Notify me when this product is back in stock. 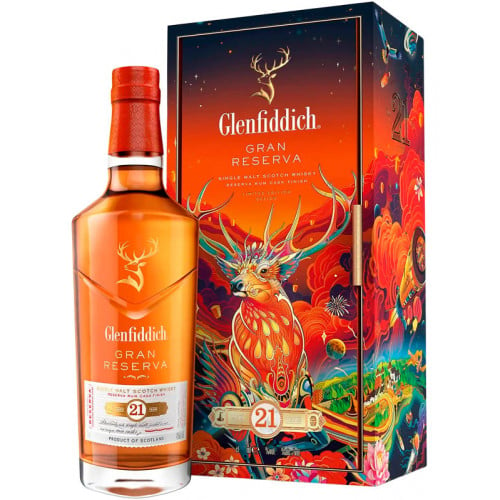 In 1886, William Grant, along with the help of his nine children and a single stone mason, began construction of the Glenfiddich Distillery, situated in the Speyside region of Scotland. After a year of hard labor, the first drop of whisky fell from the distillery's copper-pot stills on Christmas Day 1887. Today, Grant's passion, determination, and pioneering spirit continue to guide Glenfiddich Distillery, which is stewarded by the fifth generation of the Grant family.

Glenfiddich 21 Year Old Gran Reserva Single Malt Scotch Whisky is matured for 21 years in traditional oak casks. After its initial maturation, the whisky is double-barreled, or finished, for an additional four months in casks that were previously used to mature Caribbean rum. As a result of this finishing process, the whisky has a dark golden color, along with an aroma of figs, bananas, toffee, and new leather. The aroma gives way to notes of pepper, oak, citrus, ginger, and spices on the palate, and leads to a long, warming finish. The whisky earned the Double Gold Medal at the San Francisco World Spirits Competition in 2010, 2011, and 2013, and earned a score of 93 points from the Beverage Testing Institute.

This special-edition release of the 21-year-old whisky is the third and final of the Chinese New Year trilogy. Designed by illustrator Rlon Wang, the latest release features the iconic Glenfiddich stag along with festive graphics (Chinese lion, lanterns, lotus flowers, phoenix) that symbolize prosperity, wealth, and longevity in the coming year.

Dark golden color, along with an aroma of figs, bananas, toffee, and new leather on the nose. Notes of pepper, oak, citrus, ginger, and spices are on the palate. The finish is long and gently warming.