Learn more
Size750mL Proof96 (48% ABV) *Please note that the ABV of this bottle may vary
This well-rounded Speyside was aged 16 years exclusively in Oloroso Sherry casks.
Notify me when this product is back in stock. 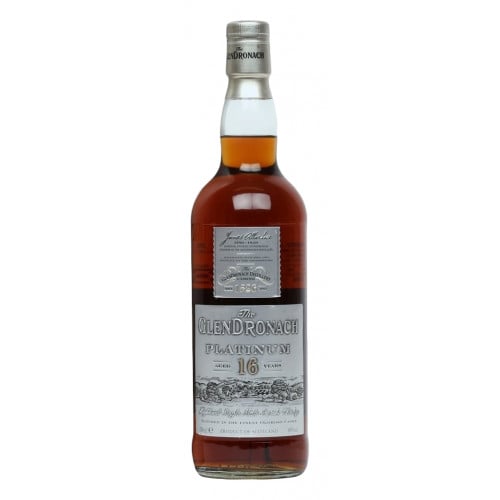 The year is 1826, the Temperance Society had just been formed in Boston, Beethoven’s Quartet No. 13 is premiered in Vienna, the combustible engine is being patented, and deep within the Scottish Highlands, in the land of peat and bagpipes, the GlenDronach distillery is being born. GlenDronach got its start shortly after the Excise Act of 1823, when James Allardice became the second person to apply for a license to distill whisky in Scotland. Ever since, the iconic Scottish distillery has been under the ownership of several well-known names in Scotch, namely; Walter Scott, Captain Charles Grant, and William Teacher and Sons.

This Glendronach expression “Platinum,” was matured for 16 years exclusively in Oloroso sherry casks. Created according to longstanding traditions this single malt is a compelling whisky with signature Glendronach sherry-flavors.

Sultanas, dried fruits, honey, nuts, coffee, citrus, and smooth vanilla aromas on the nose. The palate is sweet and honeyed with berries, spice and oak. The finish is medium length with a lingering note of sherry.