Caskers Rewards members earn up to 34 store points back when buying this bottle.
Size750mL Proof92 (46% ABV)
A monumental occasion for Glendalough Distillery and Irish whiskey in general, this luxurious release marks the first time an Irish single malt is aged in Irish casks.
Notify me when this product is back in stock.

Caskers Rewards Caskers Rewards members earn up to 34 store points back when buying this bottle. Learn more
Out of stock
Skip to the end of the images gallery 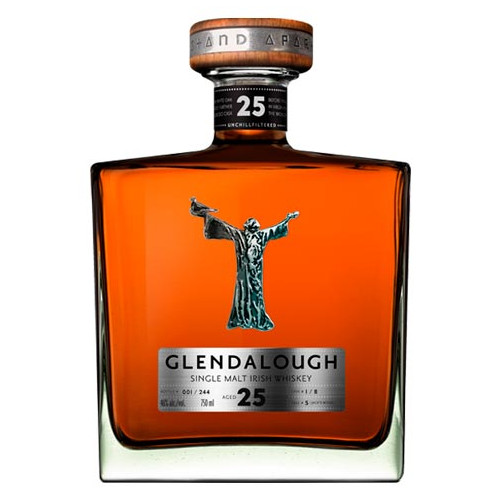 Glendalough 25 Year Old Single Malt marks a special occasion for the distillery as well as Irish whiskey in general. It is the first single malt coming from Ireland that is aged in new Irish oak casks made from the very first tree cut down by the distillery itself in the Wicklow Mountains. These come into play at the very end, after maturation in charred American oak ex-bourbon casks and Spanish ex-Oloroso sherry casks has already taken place. The end result is bottled at 92-proof without chill filtration. This incredibly rich and round release is limited to 1,800 bottles worldwide.

The nose is incredibly rich with tangerine and dark dried fruits, as well as notes of chocolate, nuts, and toasted oak. They are joined on the palate by yet more fruit, honey, raisins, salted caramel, leather, tobacco, and woody spice.