Size750mL Proof113.6 (56.8%, ABV)
Batch 7 of this acclaimed Speyside whisky was matured in a combination of PX and Oloroso sherry puncheons, along with a small quantity of virgin oak and Rioja wine casks. The rich and deep expression is bottled at a cask strength of 113.6 proof without chill-filtration and coloring.
Notify me when this product is back in stock. 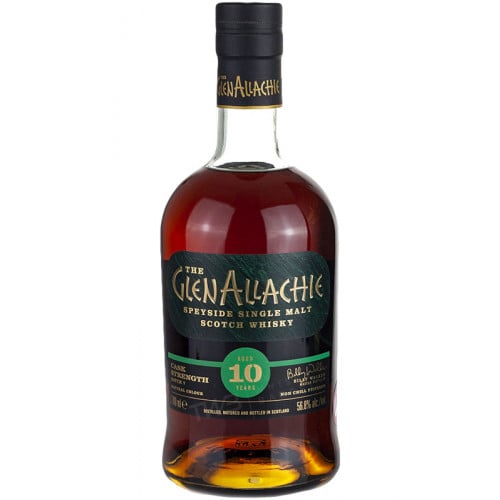 When the GlenAllachie distillery was revived in 2017 by Billy Walker, Trisha Savage, and Graham Stevenson, they were reviewing some stock from 2007 and 2008. Master Distiller Billy Walker quickly realized that the samples of Speyside whisky were particularly balanced. The decision was made to add a 10-year-old whisky to the core range, and this is how The GlenAllachie 10 Year Old Cask Strength came to be. Since then, various batches have earned several of the most prestigious awards, including being named "World's Best Single Malt" at the World Whiskies Awards in 2021. Batch 7 mas matured in a combination of PX and Oloroso sherry puncheons, along with a small quantity of virgin oak and Rioja wine casks. Bottled at a cask strength of 113.6 proof without chill-filtration and added coloring, the whisky is rich and deep with notes of plum, dark chocolate, raisins, and honey.

Get your bottle of this deliciously rich whisky today!

The mahogany-colored whisky opens with honey, dried fruit, cinnamon, nutmeg, orange zest, and hints of coffee. The palate is equally rich with considerable depth of flavor. Look for notes of dark chocolate, fig, honey, raisin, baking spice, plum, and a touch of citrus.