Size500mL Proof92 (46% ABV)
Glasgow 1770 Triple Distilled is the third single malt in the Glasgow Distillery Company’s signature range. This smooth and complex expression is distilled thrice, and matured in virgin oak casks. A well-judged single malt that could appease bourbon and Irish whiskey drinkers, according to Malt.
Notify me when this product is back in stock. 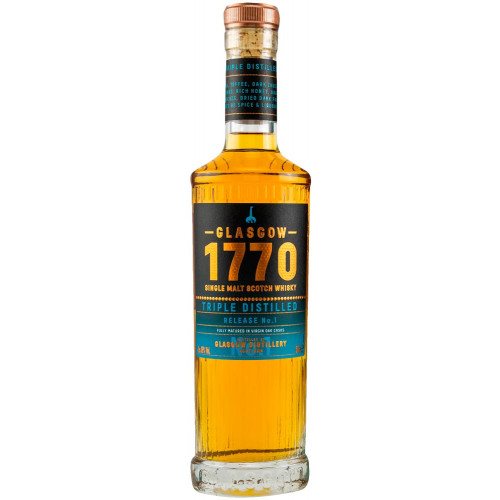 When The Glasgow Distillery Company opened in 2014, it became the first single malt whisky distillery in Glasgow for over 100 years. Named after one of Glasgow’s original distilleries, which was founded at Dundashill in 1770 and closed at the beginning of the 20th century, The Glasgow Distillery Company embraces the pioneering spirit of Scotland’s first licensed distillers. The founders, Liam Hughes, Mike Hayward and Ian McDougall, are on a mission to bring single malt distilling back to the city, and hope that their venture marks the start of a whole new age of distilling in Glasgow. Committed to authenticity and quality, the distillery’s innovative and skilled team uses the finest ingredients, the best distilling equipment, and best casks from around the world to make a wide portfolio of handcrafted premium spirits. Their whisky, gin, rum and vodka are distilled in five copper pot stills, Annie, Mhairi, Tara, Margaret and Frances. Attention to detail and the superb craft that go into their products have already earned the company a number of awards from international spirits competitions.

Glasgow 1770 is the distillery’s signature range, which brought single malt whisky back to the city of Glasgow. The range consists of the original, peated and triple distilled expressions. The range’s name, 1770 – the year when the original Glasgow Distillery was founded, is a nod to the heritage of single malt distilling in Glasgow. The finest Scottish barley and the exceptionally pure water of Loch Katrine are combined to create the finest spirit. Glasgow 1770 whiskies are matured in the finest casks, and always non-chill filtered.

Glasgow 1770 Triple Distilled Single Malt Scotch Whisky is the third expression to be added to the Glasgow 1770 signature range. This incredibly smooth and complex expression is distilled three times – a practice usually associated with Lowland and Irish distillers – in traditional copper pot stills, and matured in virgin oak casks before being bottled at 46% ABV without an age statement.

The nose starts with dark cherry, caramel toffee and fruity aromas leading to roasted almond and licorice over a backdrop of vanilla and tea leaves. The palate is smooth and elegant, with hints of ripe pear, baked vanilla cheesecake, and spicy chocolate. The long and clean finish has lingering notes of rich honey and vanilla.