$16.99
Rating:
93%
4.7
Size750mL Proof70 (35% ABV) *Please note that the ABV of this bottle may vary
This highly unique TABASCO blended whiskey earned a Gold medal at the 2018 San Francisco World Spirits Competition.
Notify me when this product is back in stock.

This product is available in: CT, DC, IL, NV Unfortunately, we can't ship to PO Boxes and APO addresses. 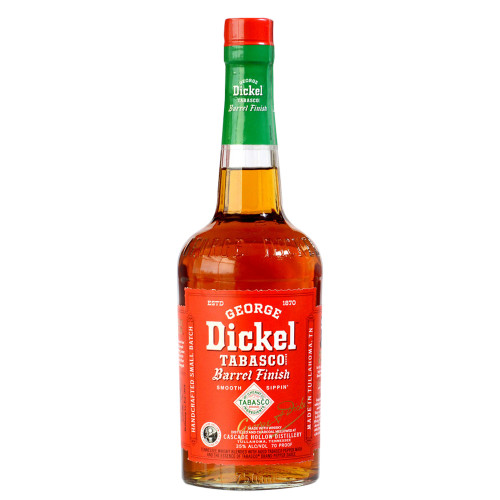 This incredibly unique George Dickel rested for 30 days in ex-TABASCO barrels that still harbor some residual aged Tabasco pepper mash, imparting a distinctive spice & flavor onto the whisky. Next, the Tabasco sauce is distilled to create an essence which is then carefully blended with the whisky. The result is an incredibly unique George Dickel Tabasco Brand Barrel Finish that earned a Gold medal at the 2018 San Francisco World Spirits Competition. Expect deliciously smooth notes with a spicy finish.

Warm pepper notes all throughout the nose and palate. A smooth, balanced, George Dickel characteristic sweetness, yet not cloyingly sweet. The finish is smooth with a brush of spiciness.