Be the first to review this product
Aged for over four years, only 60 bottles of this Caskers exclusive will ever be available.
Add to Wish List
Notify me when this product is back in stock.

Situated on a rolling ranch in Texas Hill Country, Garrison Brothers Distillery was founded in 2005. The distillery is the oldest legal whiskey distillery in Texas. "Like everything in the Lone Star State, our dreams were big from the start," says Dan Garrison, the distillery's owner. "We didn't want to make just any bourbon — we wanted to make the best bourbon ever made."

Once the grains arrive at the distillery, they are milled and mashed before being fermented for four days. Following fermentation, the wash is distilled through an antique, copper pot still nicknamed the copper cowgirl. "She was made as an experimental still," says Garrison, "for Wild Turkey Distillery." After the bourbon has been distilled, it is aged in charred, American oak barrels. "The char softens the wood, and allows the bourbon to expand into the wood. When it gets hot — and it gets hot out here in Texas — that bourbon will soak deep into the wood and extract the chemical compounds that are in there."

For this Caskers exclusive, we teamed up with Garrison Brothers’ Master Distiller Dennis Todd to hand-select a single barrel of Garrison Brothers Texas Straight Bourbon Whiskey just for Caskers members. The particular barrel (#2457) that we selected was distilled and barreled in January, 2012, and aged for four years, three months and 14 days (the barrel spent most of its time in Barn #8 before being transferred to Barn “Uno” in early 2016). Brought to 94 proof with rainwater, this exclusive bourbon has a beautiful burnt orange hue along with an aroma of nougat, vanilla and cherry pie. The palate has intense flavors of pear, maple candy and coconut, and leads to a luxurious finish with touches of caramel, oak, cherry cola and cinnamon.

Only 60 bottles of this exclusive bourbon will ever be available — make sure you pick one (or two) up today!

Beautiful burnt orange hue along with an aroma of nougat, vanilla and cherry pie. The palate has intense flavors of pear, maple candy and coconut, and leads to a luxurious finish with touches of caramel, oak, cherry cola and cinnamon. 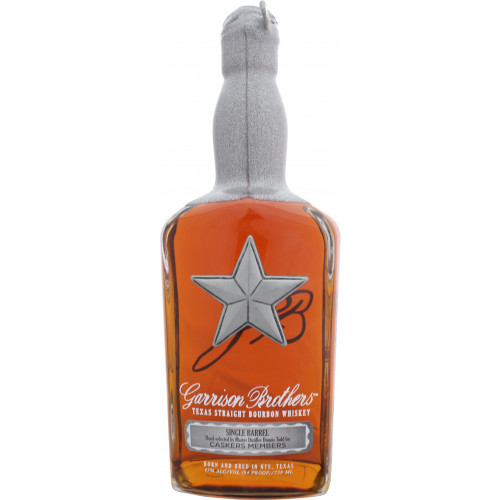