Size750mL Proof94 (47% ABV)
This gift pack contains two Boot Flasks (375ml bottles) of Garrison Brothers' award-winning bourbon and one Bottle Koozie, packaged in an attractive ammo-box tin container.
Notify me when this product is back in stock. 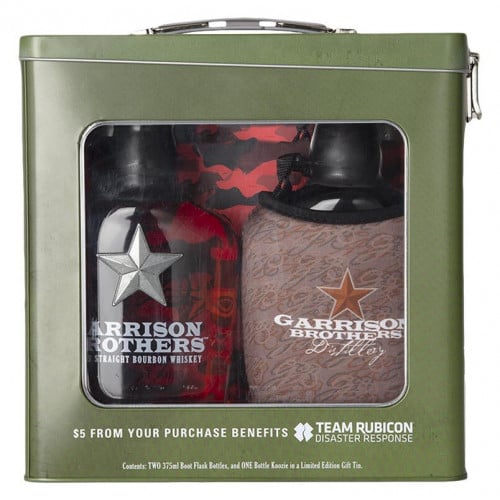 As a result of this aging process, the bourbon has a richness and depth of flavor that has brought the spirit several awards over the years. The Garrison Brothers Boot Flask is the same smooth, award-winning Garrison Bros bourbon, packaged for portability and ergonomically designed to slide into your back pocket — or fit inside your favorite pair of boots. This handy gift pack contains two 375ml boot flask bottles as well as a Bottle Koozie, packaged in an attractive tin container that resembles an ammo box.

The nose opens with fruity apple, honey, cinnamon, and leather notes with a floral and grassy touch. The palate has orange zest, honeysuckle, cake, baking spices, citrus, and a pleasant sweetness that lasts through the long and complex finish that brings nuttiness into the mix.