Rating:
82%
(3)
This Small Batch Select marks the first permanent addition to the Four Roses portfolio of premium Bourbons since 2006.
$62.99
Add to Wish List

On the banks of the Salt River, nestled in the quiet Kentucky countryside near Lawrenceburg, Four Roses Distillery is a testament to American ingenuity and perseverance. Built in 1910 to resemble the architecture of California wineries, the distillery — now listed on the National Register of Historic Places — was one of six distilleries that were granted permission to operate during Prohibition.

Bottled at a solid at 104 proof, Four Roses Small Batch Select marks the first permanent addition to their portfolio of premium Bourbons since 2006. This extra proof and non-chill filtered Small Batch Select has a richer profile more robust profile than the signature Four Roses. Made from six of the ten: OBSV, OBSK, OBSF, OESV, OESK, OESF, each of the bourbons in this small batch selection are six to seven years old.

On the nose, Four Roses Small Batch Select offers raspberries, clove and nutmeg. As it hits the palate, it opens into flavors of apricot, ripe berries, vanilla and light oak. The finish lingers with notes of spearmint and a touch of cinnamon. 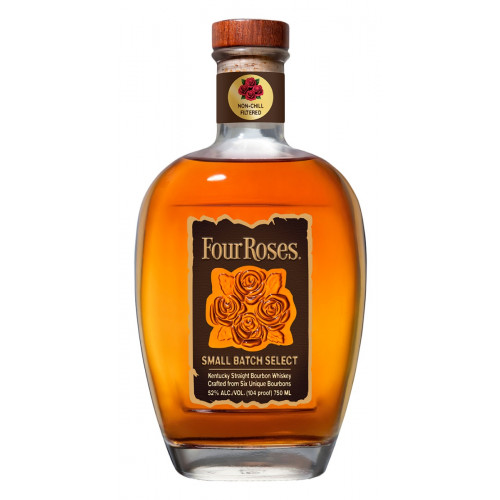