Caskers Rewards members earn up to 36 store points back when buying this bottle.

Size750mL Proof111.4 (55.7% ABV)
The 2020 edition of the coveted Four Roses' annual Limited Edition release is crafted with bourbons aged between 12 and 19 years. Non-chill filtered and bottled at 111.4 proof, this masterfully-balanced expression is more than the sum of its parts.
Notify me when this product is back in stock.

Caskers Rewards Caskers Rewards members earn up to 36 store points back when buying this bottle. Learn more
Out of stock
Skip to the end of the images gallery 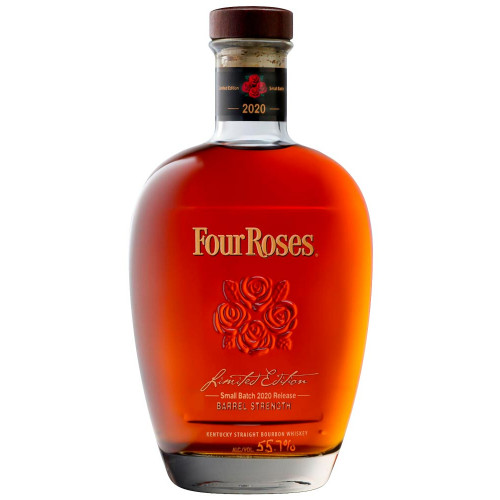 On the banks of the Salt River, nestled in the quiet Kentucky countryside near Lawrenceburg, Four Roses Distillery is a testament to American ingenuity and perseverance. Built in 1910 to resemble the architecture of California wineries, the distillery — now listed on the National Register of Historic Places — was one of six distilleries granted permission to operate during Prohibition.

A signature trait of Four Roses is their use of full transparency; they display the different distillates and recipes that go into each bottle. This showcases how the limited edition blends have evolved year after year. Historically The Four Roses Distillery has been known to use five different yeast strains and two mash bills at any given time. This means that a total of 10 different distillates can be used to blend their bourbons. Every barrel at Four Roses is labeled with a four-letter code. Each yeast strain and mash bill is identified by corresponding letters K, O, Q, F, V (for the mash bills) and E and O (for the yeast strains).

There's a special edition, small-batch bourbon that Four Roses releases every September in honor of National Bourbon Month. The 2020 release is a 111.4-proof bourbon that is bottled without chill-filtration and is crafted with a hand-picked selection of batches: a 12YO OBSV-recipe bourbon, a 12-year-old OESV, a 19-year-old OBSK, and a 16-year-old OESK. "Each batch in this year’s limited edition bottling is an exceptional whiskey that could have stood on its own as a single barrel offering, but in this case the sum is even greater than the parts. Together these bring a perfect balance of bright, vibrant flavors and aromas from the 12 and 16-year-old barrels combined with the oak tones and aged expressions from the 19-year-old batch," says Master Distiller Brent Elliott. As a non-core range limited edition, once this bourbon is gone, it’s gone forever.

The deliciously-balanced nose has plenty of fruity aromas with apple and orange zest, honey, and vanilla. The palate is even fruitier with apricot, pear, and red berry notes. Finishes satisfyingly long with rye spice, oak, and fruit notes.