Size750mL Proof90.4 (45.2) ABV
Discovered at the old Stitzel-Weller Warehouses and originally distilled at the historic Bernheim Distillery in Louisville, KY, this rare 22-year-old bourbon is the third release of the progressively aged Rhetoric Expression from Orphan Barrel. It earned 95 Points from Wine Enthusiast.
Notify me when this product is back in stock. 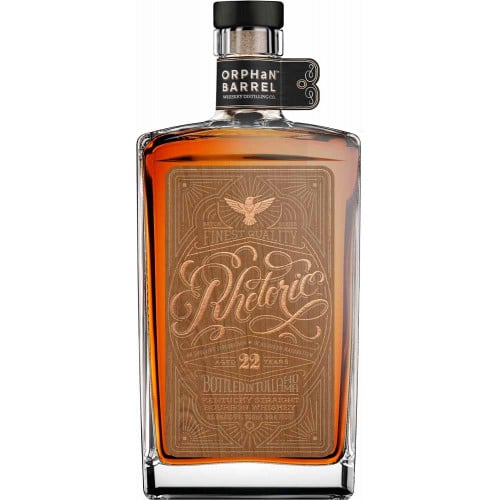 In 2013 bourbon and Tennessee whiskey were labeled the fastest growing product category by volume in the U.S. alcohol business. The Orphan bottling project was more or less an ingenious response to this boom in the whiskey industry, and an effort to accommodate the vast quantities of leftover product from their monopoly of acquisitions. When Diageo didn't have a place for the acquired product in their blends, they set the spirits aside. Time transformed this new spirit into aged delicacies. In 2013, Orphan Barrel Whiskey was created by Diageo, commercializing a large stock of ultra-aged American whiskeys that it had been maturing at the Stitzel-Weller distillery in Shively Kentucky.

So far Orphan Barrel has only released American whiskey, with expressions like Barterhouse, The Gifted horse, Lost Prophet, and Forged Oak, with Old Blowhard being retired in 2014. Their Orphan Barrel Rhetoric 22 Year Old Bourbon was discovered at the old Stitzel-Weller Warehouses in Louisville, KY. This rare 22-year-old bourbon was originally distilled at the historic Bernheim Distillery in Louisville, KY

The annual progressive release of this Kentucky elixir is in its 22nd year. Rhetoric 22-Year-Old Kentucky Straight Bourbon Whiskey is the eighth release from the Orphan Barrel Whiskey Distilling Company, third in the Rhetoric series. This Bourbon carries a higher proof at 90.4. Beginning with hints of toasted grains, cherries and oak wood, Rhetoric 22-Year-Old tastes of toasted oak, dark chocolate with ripe banana and baking spices of clove and anise. The finish is long and woody ending with dark chocolate notes.

The label is designed in tribute to the oak barrels in which the whiskey aged, discovered at the old Stitzel-Weller Warehouses in Louisville, KY. The Bourbon was originally distilled at the historic Bernheim Distillery in Louisville, KY, and is hand-bottled in Tullahoma, Tennessee. The mash bill for Rhetoric Whiskey is 86% corn, 8% barley and 6% rye.

Enjoy a bottle of this Bourbon today!

Beginning with hints of toasted grains, cherries and oak wood, Rhetoric 22-Year-Old tastes of toasted oak, dark chocolate with ripe banana and baking spices of clove and anise. The finish is long and woody ending with dark chocolate notes.