Caskers Rewards members earn up to 10 store points back when buying this bottle.
Size750mL Proof115.6 (57.8% ABV)
Four Gate Whiskey Company’s Release #4, Split Stave™ by Kelvin is a Kentucky straight bourbon whiskey finished in innovative Split Stave™ casks, which were built by breaking down and reassembling three types of casks. Only 2,700 bottles of this inaugural Split Stave™ by Kelvin release were produced at 115.6 proof.
Notify me when this product is back in stock.

Caskers Rewards Caskers Rewards members earn up to 10 store points back when buying this bottle. Learn more
Out of stock
Skip to the end of the images gallery 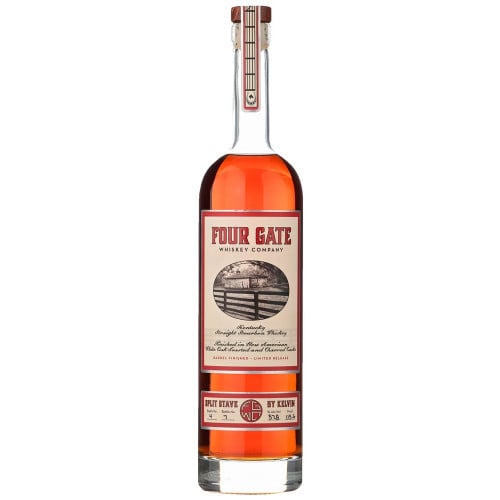 Four Gate is a whiskey company from Louisville, Kentucky that specializes in sourced whiskey blends. The company blends the highest quality whiskey available to create new, unique, and exciting batches of barrel-finished craft American Whiskey. They work closely with the barrel experts at the family-owned, Louisville-based Kelvin Cooperage to find new and innovative ways for barrel finishing their releases. Four Gate was founded in 2018 by Bill Straub, who is the company’s Chief Blending Officer, and Bob D’Antoni, the Chief Barrel Officer. While Straub has leveraged his knowledge of bourbon and the industry as founder and Editor-In-Chief of ModernThirst.com, D’Antoni is a successful local entrepreneur who has used his connections to establish relationships to get his hands on some terrific bourbon.

Four Gate Whiskey Company’s Release #4, Split Stave™ by Kelvin is a Kentucky straight bourbon whiskey finished in innovative Split Stave™ casks designed and produced exclusively for Four Gate by Kelvin Cooperage. The casks for this release were built by breaking down a series of medium toast casks, a series of #2 char casks, and a series of #4 char casks, and reassembling them, alternating toasted staves and #2 char staves on some barrels, and toasted and #4 char staves on others. These barrels were then filled with a blend of a 5.5-year-old Kentucky straight bourbon and a 12-year-old Kentucky straight bourbon, and left to rest for five months. The whiskey was bottled uncut and unfiltered at 115.6 proof. Only 2,700 bottles of this inaugural Split Stave™ by Kelvin release were produced.

Dark cocoa powder with hints of creamy crème brûlée on the nose usher in oak, sweet custard and cinnamon on the palate. The finish is intense, long and rich, with the oak notes intermingling with dark chocolate and earthy tobacco.