Learn more
Size750mL Proof113.4 (56.7% ABV) *Please note that the ABV of this bottle may vary
Four Gate Whiskey Company’s Release #11, Ruby Rye Springs, is a 7-year-old Indiana straight rye whiskey finished for forty-two days in ruby port-rum casks and bottled at 113.4 proof. The result is a delicious whiskey showcasing citrus and spice characteristic of the sourced base spirit, with added fruity sweetness.
Notify me when this product is back in stock. 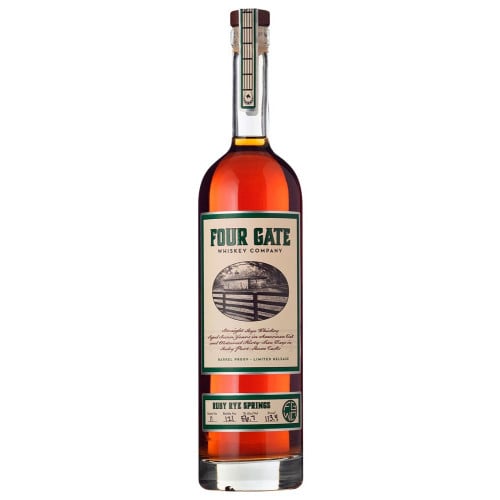 Four Gate Whiskey Company’s Release #11, Ruby Rye Springs, is a 7-year straight rye whiskey finished in ruby port-rum casks. Following batches 7 and 10, this is the third presentation of the same underlying rye whiskey made from a mash bill of 95% rye and 5% malted barley. This time, the Indiana-sourced straight rye was finished for forty-two days in ruby port-rum casks. The secondary casks were originally used to mature ruby port, a sweet and bright style of port wine, and after that they were used to age a blend of rums by Virago Spirits in Richmond, VA, imparting them with a lush molasses sweetness that pairs excellently with the bright red fruit of the ruby port. Only 1,444 bottles were produced at 113.4 proof.

The nose has aromas of fruit cake, tart gum drops, lemon and orange zest, and spicy rye. A sweet tart red berry note greets the tip of the tongue, and a spicy black pepper flows down the center palate, with raspberries and blueberries on the periphery and a hint of citrus. The medium-to-long finish is dominated by black pepper and sweet red fruits at the start, with sweet molasses rounding out the viscous mouthfeel.